Beyond the Budget Numbers for 2022... The Syrian Economy Has a Stroke.

Like its predecessors, the state's general budget for 2022 reflected the country's deteriorating situation on all fronts. The factors of war and economic sanctions, and, before this and that, the government policies followed for decades, left an economy afflicted with a heart attack and an infrastructure paralyzed in most of its sectors, which was reflected in a significant decline and deterioration in all indicators of Syrian economic performance.

The state of economic deterioration in Syria does not need proof, as more than half of the Syrian population has been displaced inside and outside the country, and hundreds of thousands (if not millions) of Syrians are added to the poverty indicators every year, in light of their increasing lack of food, health services, education and work, parallel with consecutive waves of economic inflation, and the deterioration of the situation of the Syrian pound, which has lost 90% of its value - at least - since 2020.

According to United Nations data, if we put aside the effects of the massive economic inflation in the country, the GDP of Syria has actually fallen to a level close to its level in the mid-nineties of the last century, which means that the country lost the cumulative GDP growth during nearly 25 years (which is the output that It was originally increasing very slowly as a result of the economic policies of successive governments since before the crisis).

General government spending continues to decline year on year, as the state's general budget for 2022 amounted to approximately 13.3 trillion Syrian pounds. Of course, if we look at the issue superficially, this budget is “the largest public budget in the country’s history,” as it rose in Syrian pounds by nearly 57% over the general budget for 2021, which amounted to 8.5 trillion Syrian pounds. But the real value of the budget actually decreased by about 17% within one year, as it moved from about 6.8 billion dollars in 2021, to 5.3 billion dollars in 2022. This is without forgetting that the budget numbers in general are (estimated) numbers and there is no evidence that These numbers have actually been spent (as the completion of cutting government budgets accounts for previous years is delayed, and is not widely disseminated if they are completed). 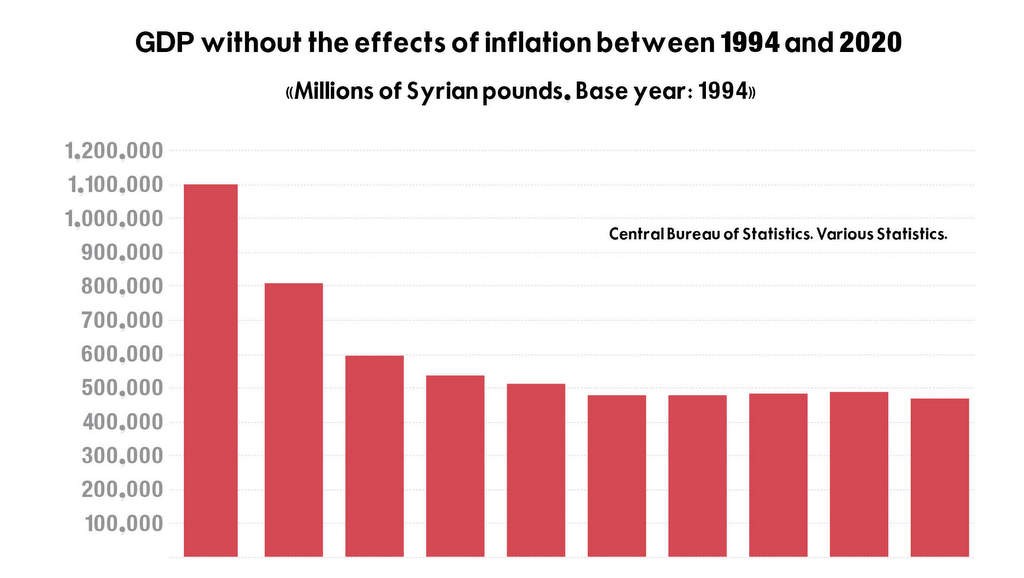 The decline in investment spending is exacerbated

The general budget in Syria does not provide complete information about the (originally estimated) aspects of government expenditures, especially since the broad categories of classification (such as administrative expenditures, government services, etc.) often do not allow tracking the actual destination of spending, and thus the inability of it to be well measured, analyzed, and understood, which provides an additional loophole for the corruption rooted in the state apparatus to exploit. 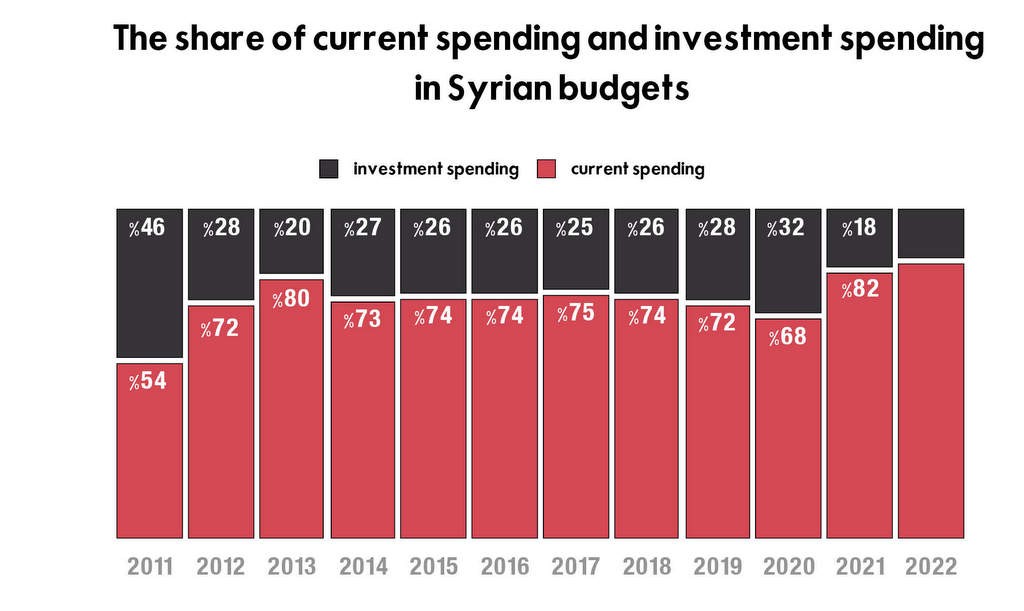 The 2022 budget depends largely on deficit financing, as the share of “other imports” that includes withdrawals from reserves, treasury bonds, gifts and subsidies increased from 29% in 2021 to 31% in 2022, and this is one of the main factors that fuel inflation and the deficit in the country’s budget.

More importantly, the 2022 budget includes a sharp reduction in oil subsidies, as the allocations for subsidizing oil derivatives sharply decreased by about 32% in real terms compared to 2021. It represents 20% of the 2022 budget compared to 32% in 2021.

The total share of social support decreased from 40% in 2021 to 38.3% in 2022, and this is the “fruit” of the government’s perseverance to walk the path of lifting support for Syrians under various pretexts and excuses.

In other sectors, government spending on social subsidies continued to decline significantly. Relying on the real value, allocations to the education sector in Syria decreased between 2021 and 2022 by 15%, by 29% in the social affairs sector, and 33% in the water and sanitation sector.

Last modified on Tuesday, 20 September 2022 15:10
arrow_forward The Way to Expel the Americans from Syria, As Soon As Possible and With Minimal Losses Direct Political Negotiations... A Mandatory Entry to the Solution arrow_back