Supporting Hunger: The Syrian Loaf of Bread Amidst the Global Food Crisis

Talking about the global food crisis is no longer just speculations and warnings done by some, as the countries of the world, the countries of the global south in particular, have made real steps in this direction. At the Syrian level, where we are already suffering from food insecurity, the country is effectively left to the unknown, to be a prey between the jaws of the global food crisis, which is still not clear where it is headed yet. In addition, internal plunderers are ready to seize any crisis that increases the accumulation of wealth above their already accumulated wealth.

The war in Ukraine was a convenient pretext for internal plundering forces to acquittal themselves of the responsibility of exacerbating the local food crisis. However, without neglecting the role of the Ukrainian war, and the U.S. sanctions imposed on Russia in particular, the primary responsibility for the deterioration of the food situation in the country falls upon major local plunderers who made food a substance for profit at the expense of millions of Syrians. That was through the government’s continuous policies throughout the previous years, the actual title of which was: the withdrawal of the State from playing its social role, while it resorted behind flimsy slogans such as: directing subsidies to those who deserve them, rationalizing them, and restructuring them, etc.

A Glimpse on Syria’s Food Situation

According to the estimates of the World Food Program, during one year only, millions of additional Syrians have become food insecure. The proportion of Syrians who are suffering from food insecurity has increased from 20% in 2019 to 60% in 2021, while 12.4 million Syrian citizens are suffering from “severe” food insecurity. All of that was before 2022, which witnessed “qualitative shifts” in the country’s deterioration. According to estimates, the majority of Syrians citizens are forced to follow unhealthy diets based on excessive reliance on sugars and oils, severe lack of animal proteins and vitamin A, reducing the number of meals, and reducing the shares of adults to satisfy children, and intensifying dependance on bread. 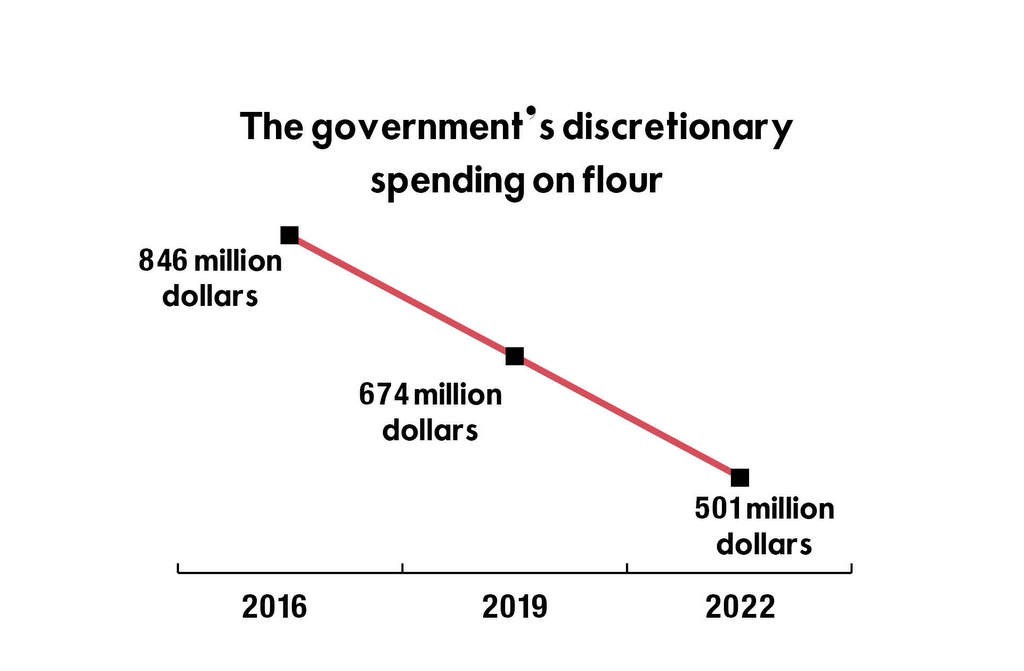 Bread is Not a «Red Line»

While government policies over the past years should have focused on securing the livelihoods of Syrians, government “discretionary” spending on the sector of agriculture in the government budget has generally witnessed a sharp decline from $515,432,500 in 2011 to about $124,686,914 in 2021. That is, spending in 2021 did not exceed quarter the spending in 2011 (if we were well-intentioned and accepted that these amounts were actually spent).

In parallel, and despite all the fuss made by the official media about the figures of subsidies allocated to secure bread, these accurate figures reveal the lies. The estimates of flour subsidies in the State’s general budget for example have decreased from $846 million in 2016 to $674 million in 2019. According to the statements of Abdul Latif al-Amin, director general of the General Establishment for Cereal Processing and Trade, to the Syrian Arab News Agency “SANA” in mid-February 2022, the cost of daily bread subsidies is equivalent to 5.5 billion Syria pounds, i.e., about $501 million annually. That is, the estimates of flour subsidies have decreased by more than 40% during 6 years only.

Moreover, there are many food-related spending positions that have been reduced as a natural result of the decline in the real value of the general budget and the item (the contribution of the State in fixing prices – social support), which includes several fields such as spending on agricultural scientific research, dairy farms, poultry, fisheries, mills, and bakeries. It is recalled that irrigated land by government irrigation projects have decline from 817 thousand hectares in 2002 to 286 thousand hectares in 2019. The number of mills and the production of chicken, eggs, and cows have also declined during the same period in proportions that reveal the level of government neglection of the food crisis, which has now become an untreatable reality. 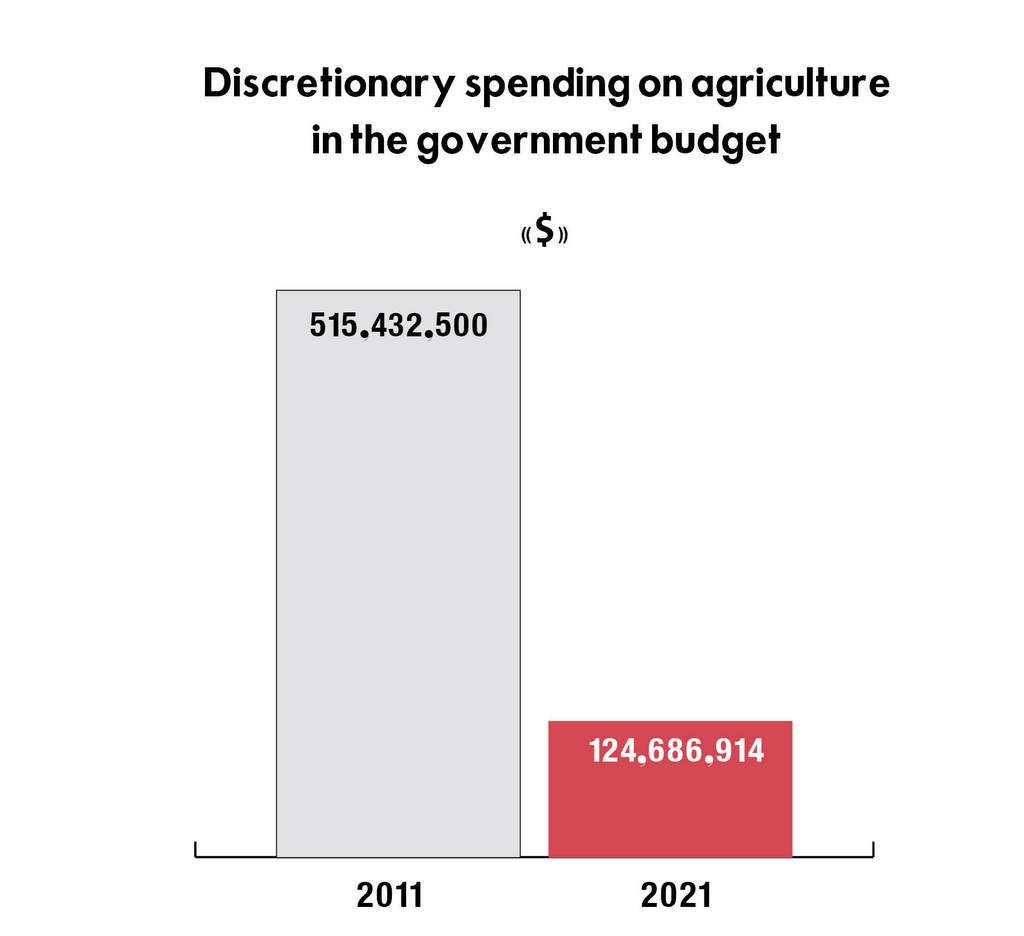 Public bakeries represent the lifeline of millions of plundered Syrian families, as 12.4 million Syrians who are suffering from food insecurity today depend on government subsidized bread to secure the minimum daily calories necessary to survive. Under the country’s poor wage system, even “plain bread” has become something difficult to provide. What if we assumed that the Syrian family decided to eat bread only to get their necessary calories without any other addition? To secure 2400 calories, an individual needs 984 grams of bread, which means that the Syrian family of 5 needs 4920 grams a day and 152,520 grams a month. So, by taking into consideration that the government subsidized bundle of bread supposedly weighs 1100 grams with 7 loaves inside, then the weight of one loaf is about 157 grams, which means that the family needs about 31 and a half loaves of bread per day, and approximately 976.5 loaves per month.

In this case, the family of 5 will pay 12,102 Syrian pounds for 339 subsidized loaves, and 109,267 Syrian pounds for 637,5 unsubsidized loaves. In sum, they will pay 121,369 Syrian pounds per month for “plain bread” only, given that the minimum wage of the Syrian worker does not exceed 92,970 Syrian pounds. That is, the minimum wage of the Syrian worker only covers 76.6% of the price needed for the family to eat plain bread only, and that is if they were lucky to be able to take their full subsidized monthly allocations! Despite the already poor situation of bread as we have explained, those concerned in the country have turned a blind eye to other issues related to food security in the country during the past years, such as successive warning to United Nations organizations that drought and poor rainfall will affect the country’s wheat crop. 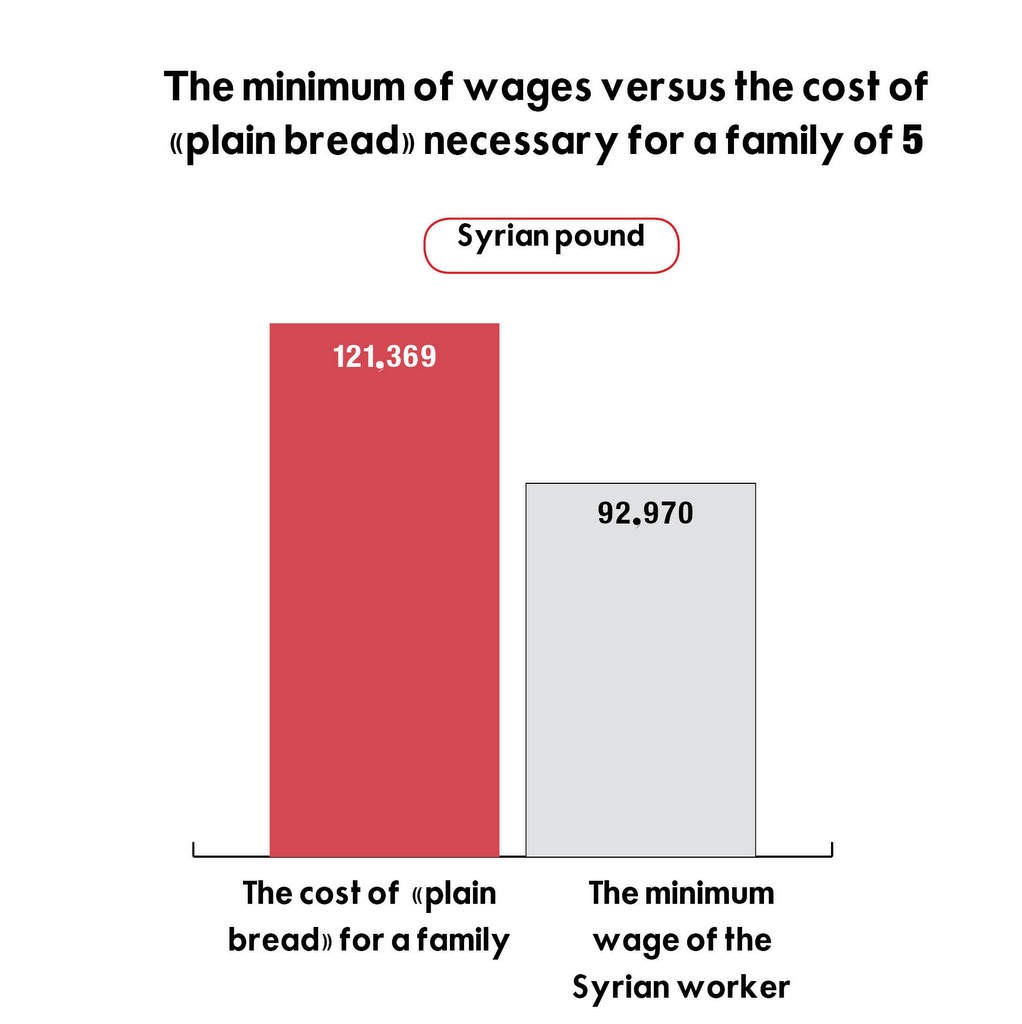 Before the outbreak of the crisis in 2011, the country had 4 yeast factories owned by the State in Aleppo, Homs, Harasta, and Chebaa that provide about 113 tons of yeast necessary to produce bread daily. As for today, the State only has one yeast factory in Homs that produces from 6 to 10 tons only, i.e., no more than 9% of pre-crisis production. This is under the absence of any serious official endeavor to solve this issue, as we never heard any indication that those concerned are seeking to put an end to the process of importing dry yeast imposed by the conditions of the crisis. (Recently, the United Nations said that they will allocate one million dollars to rehabilitate the yeast factory in Homs, to bring its production to 24 tons per day).

In the same way, the country’s production of wheat during the years of the crisis has declined, as it is expected that this year’s harvest will not exceed the threshold of one million tons at best. This is after the Syrian production exceeded 4 million tons in 2010 according to government figures, achieving self-sufficiency and exporting about one million tons of it abroad. Out of the one million tons produced currently, the eastern region produces an amount between 700 thousand and 800 thousand tons, which is approximately 80% of the country’s total production. This production is under direct threat, as some estimates indicate that 16% of the eastern region’s farmers have not been able to reach any irrigation source such as water wells and rivers, while harvest losses from high temperature have reached 30% during the 2020 – 2021 season.

Last modified on Wednesday, 27 July 2022 14:49
arrow_forward Food System in Syria: Wasting and Stunting are Threatening Millions of Children. Why Did Kissinger Change His Mind? arrow_back