Syria’s Children: Millions of People in Need and Coercive Engagement in Labor Market

Eleven years after the crisis erupted in the country, its disastrous impacts have affected the entire society, and of course, children were the most vulnerable and fragile segment. The crisis and its repercussions have left millions of children in need, who are obliged to coercively engage in labor market to fill part of the huge gap between wages and the minimum of food and living costs. Meanwhile, the vast majority of these children live in unsuitable environments and consequences that threaten them with negative social impacts that may expand to a minimum of two generations.

In this regard, the United Nations International Children’s Emergency Fund (UNICEF) has published a new report in March 2022, in which it showed part of the figures regarding the livelihood of Syrian children inside and outside the country. The report also included the numbers of children in need generally, and the proportion of children among the overall Syrian displaced persons and refugees in the neighboring countries. In addition to the direct physical and mental damage that affected children, as well as the educational and nutritional situation related to these children.

From 8 to More than 12,3 Million Children in Need 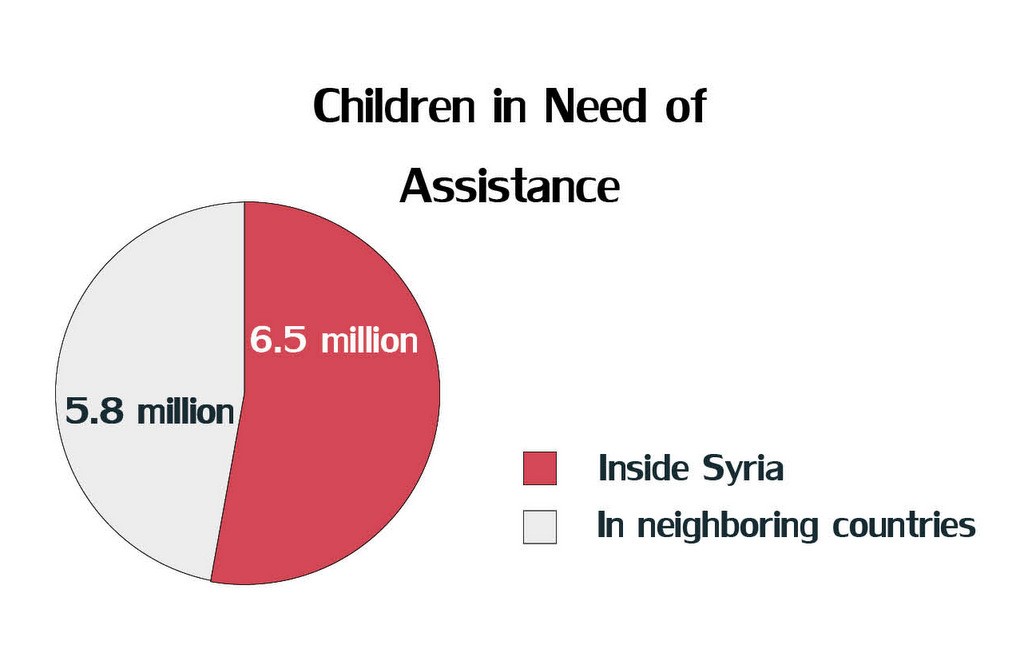 From School to the Unfair Labor Market

The circumstances of the crisis have forced the vast majority of displaced Syrian families to adopt harmful coping and adaption mechanisms, such as, sending children to work instead of sending them to school to learn. In the meantime, an unknown number of children are facing the risk of early and in some cases forced marriage. In this regard, 17% of the internally displaced Syrian families have reported that one or more children in the family have left school and joined the labor market to secure the needs of their families. These children are, of course, subject to doubled exploitation in the market, as they are forced to sell their workforce at the lowest prices and work in inhumane circumstances, whether in terms of the number of working hours or the nature of work, which often requires superior muscular effort that will have an impact on the long-term health of these children. 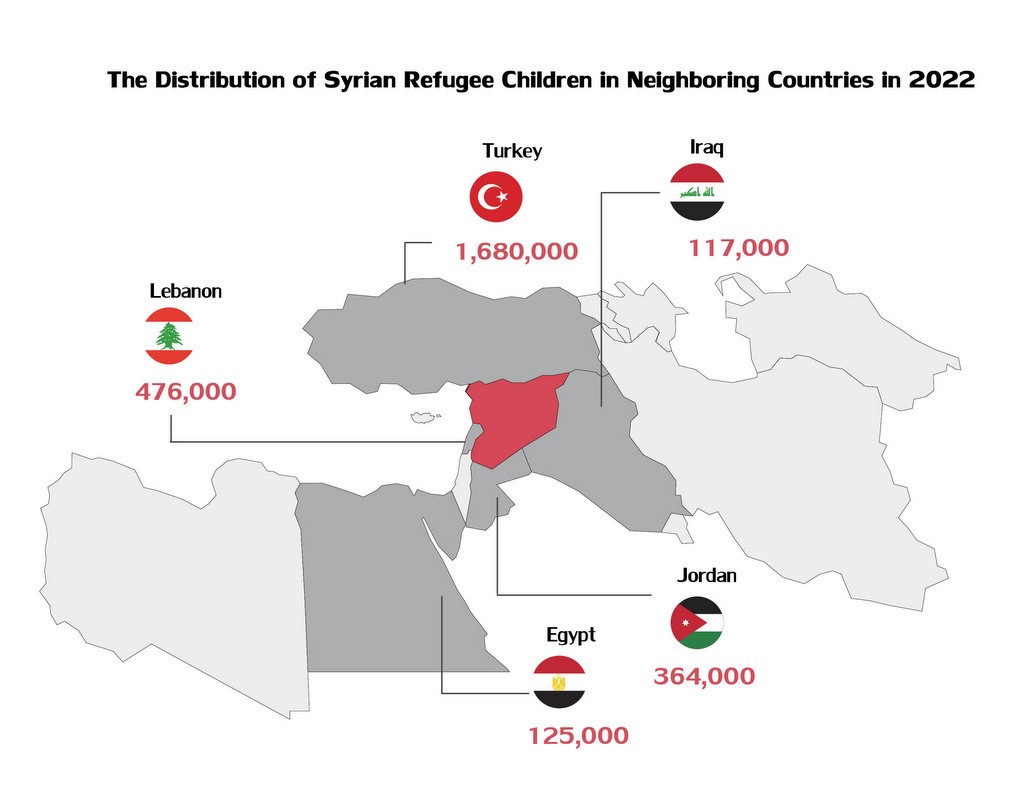 Children of the Crisis: 6 Million Children Since 2011

6 million Syrian children were born since the outbreak of the crisis in the country in 2011. 4.8 million of them are inside Syria, and more than one million children were born outside the country. The awareness of those children was shaped under the constant pressure of the years of the crisis, with all the far-reaching negative social implications that this entails. In this sense, one-third of Syrian families who were surveyed have reported tangible psychological problems in their children.

Health and Nutrition: Clear Examples of the Crisis

According to the United Nations Office for the Coordination of Humanitarian Affairs, at least 20% of children under the age of 5 years old inside the country suffer from severe malnutrition, with at least 12 million Syrian citizens suffering from food insecurity (54% of the population). Data indicate that 89% of refugee families in Jordan cannot meet their basic necessary food needs. With regard to health, the situation is not less dire for children, with only half of healthcare centers in the country operating at full-capacity, in absence of clear data about healthcare situation of children inside the country, whose health conditions are so dire that one in four children has suffered from stunting in some areas. Moreover, the United Nations Regional Refugee and Resilience Plan in Response to Crises confirmed that one in five refugee children (in Jordan and Lebanon only) suffer from direct physical disabilities. 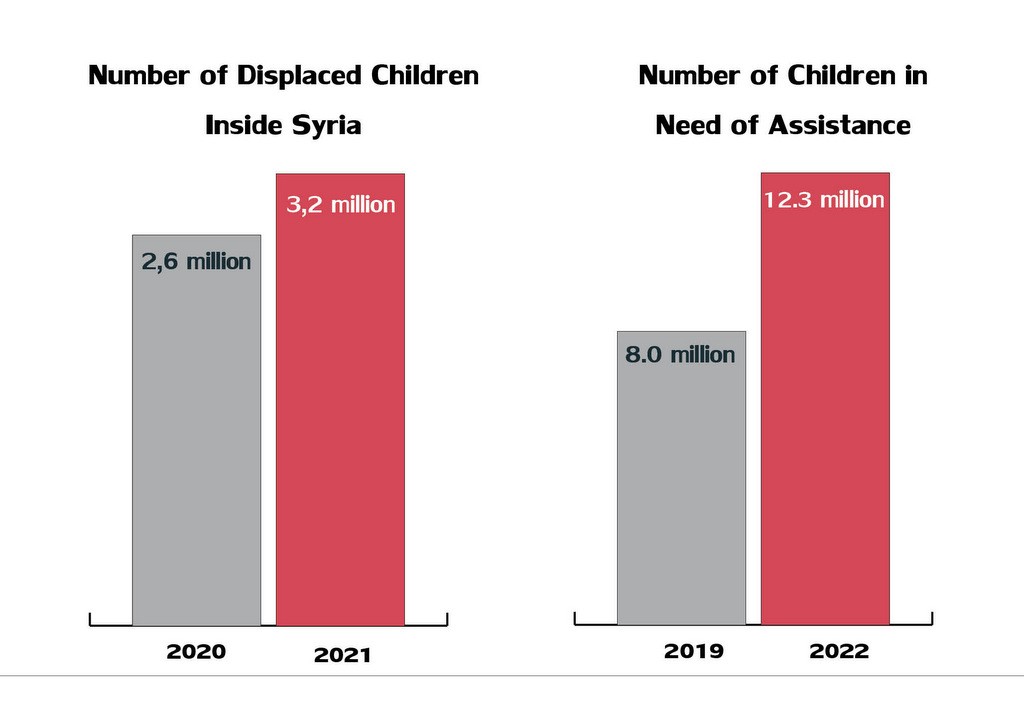 Education: Comprehensive Decline at All Levels

Today, there are a minimum of 3.6 million Syrian children who dropped out of school inside and outside Syria. There are at least 2.45 million school dropouts (inside Syria), 60% of them are males and 40% females, and 15% of school-age children inside Syria suffer from physical disabilities. Meanwhile, one in every three schools are not suitable for use, either because it was destructed, damaged and is being used to shelter displaced families, or used for military purposes. The situation is not better at all in neighboring countries, as estimates show that 750,000 Syrian refugee children dropped out of school. This figure means that one third of Syrian refugee children in neighboring countries are actually school dropouts.

Last modified on Friday, 15 April 2022 12:43
arrow_forward The Continuously Growing Destitution in Syria Only A Quarter of Government Spending is Left for Education arrow_back