In 8 Years: Syrians have lost 80% of Their Actual Wages

Hardly anyone argues today that official wages in Syria are no longer able to cover some of the actual costs of living. We have explained on several occasions on the pages of this newspaper that the State apparatus in the country has long stopped paying actual wages to its employees, whose number in 2020 was estimated by the Central Bureau of Statistics at 1,595,475 workers, out of 5,726,290 workers in general.

Since the outbreak of the crisis in 2011, the minimum wage has witnessed several increases throughout the years. However, these increases have always hidden behind them a real decline in the value of the actual wage earned by the Syrian worker. To measure this decline, we will resort in this article to estimating the minimum wage in the country during the years based on what the wage actually buys. This is done by taking advantage of several measures which are all involved in proving the fact that the real value of wages has declined.

Increases in the Syrian Pound; Decreases in Dollar

To measure the value of the minimum wage, we will rely on the data of the years 2014, 2018, and 2022, to verify the changes that occurred to the value of this wage every 4 years. Theoretically, the minimum wage has increased in the country from 13,670 Syrian pounds in 2014 to 16,750 SP in 2018, to increase again reaching 92,970 SP earned by the worker today, which means that the minimum has “doubled” about 6 times since 2018. However, part of the truth is clarified by the process of evaluating these “increases” in dollars in the black market, which is the criterion by which the prices of nearly all commodities are determined in the market. So, the actual wage has decreased from $94.2 in 2014, to $38 in 2018, to fall below $23.3 today. This means that the formal increase in the minimum wage in Syrian pounds, is met by a real decline in the value of this wage in dollars by more than 75% since 2014, which means that three-quarters of the minimum wage have flown in 8 years. 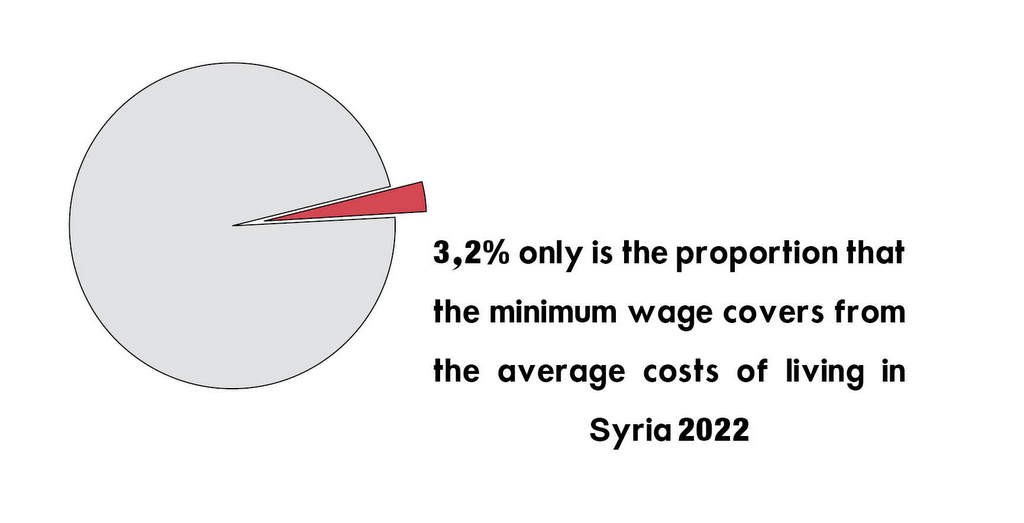 One of the other standards that can be used to approach the decline in the real value of the wages of workers in Syria is the gold standard, being one of the most stable and the least fluctuated in terms of value. In 2014, 13,670 Syrian pounds were able to buy approximately 2.6 grams of 21 karat gold, but after 4 years only, the minimum wage of 16,750 Syrian pounds was only able to buy 1.01 grams of gold, and it continued its downfall until it was barely able to buy 0.4 grams of gold. This means that the actual value of the wage according to this standard has decreased by more than 84.5%.

Perhaps one of the clearest standards in calculating the decline in the value of the minimum wage in the country is measuring it by how much it can cover from necessary living costs for the family, which includes the costs of food, as well as other essential needs such as transportation, telecommunications, education, etc.
If we consider Kassioun’s index for the costs of living, we will see that the average costs of living of a Syrian family of five (given that dependency ratio in Syria is approximately one to seven, according to the estimates of the United Nations), has increased from 70,571 Syrian pounds in 2014 to about 309,000 SP in 2018, to catastrophically escalate to about 2,860,381 Syrian pounds according to the calculations of last March. Which means that these costs have increased in Syrian pounds by about 4000% in 8 years only!
What concerns us here is how much the minimum wage covers from these costs: in 2014, the minimum wage in the country was able to cover about 19.3% from the average costs of living. This proportion fell to 5.4% in 2018, then to 3.2% in 2022, which means that the coverage ratio has decreased by 83.4% also.

Condition for the Syrian Wage to be a Real Wage

First: the supposed process of increasing wages should be done from real, non-inflationary sources. These sources are, first: large profit owners in the country, and second: real production revenues on which efforts must be put to enhance and strengthen it and to stop the processes of its liquidation that has been going on for decades. Any “increase” in wages from other unreal sources is an inflationary increase, which moves us from bad to worse, i.e., redistributing wealth for the benefit of profit owners at the expense of wage earners.

Second: there is no real solution for wages in the country as long as the minimum wage is not periodically linked to the costs of living to ensure that there is no imbalance in the proportion that this wage covers from the costs of living. Also, this link will not make sense if the authority did not recognize the minimum necessary costs of living, and adhered to Article 40 of the Syrian Constitution, which says that " Every citizen has the right to earn his wage according to the nature and yield of the work, provided that it is not less than the minimum wage that guarantees the requirements of livelihood and its changes”.

arrow_forward Why Did Kissinger Change His Mind? What Does Western Media Say About the “Jewish Agency” Crisis? In What Context Does This Crisis Emerge? What Meanings Does It Carry? arrow_back