It does not matter what is the dollar figure in exchange for the Syrian pound. The most important thing today in light of the expanding hunger is the Syrian pound figure in exchange for food. The collapse of the Syrian pound on this scale is the highest and the most dangerous, and food prices are skyrocketing at rates that exceed the price of the dollar. The issue is no longer related to import and the price of the dollar directly, as much as it is related to the (heart attack) that the Syrian economy is suffering from, which some of its officials are still saying that (the indicators are good) but (the problem is with speculators)!

The value of the Syrian pound collapsed within the three last months in front of the dollar and food prices, as both have increased at record rates. During 15 months of rapid deterioration, the last three months have been indicative of a dangerous situation.

As a result, and before going into details: since the beginning of 2020 until now, the Syrian pound has lost 72% of its value on the scale of the dollar of the market. As for its value on the scale of the basic food basket, it has decreased by about 74%. Food prices are skyrocketing at levels close to that of the dollar, and this process has intensified during the last three months, as it is fair to say that there is a relative abundance of the dollar for speculation compared to the level of abundance of basic food for circulation and trade.

If we took 100 thousand Syrian pounds as a scale, then the value of this amount has decreased at rapid rates since the beginning of 2020 until today, and that is on the scale of the dollar and food. What is meant by the two scales is what the 100 thousand Syrian pounds are equivalent to in exchange for the dollar of the black market, and in exchange for the costs of the basic food basket for the needs of a family of 5, i.e.: the level of the cost this amount covers from this basket: does it cover all needs, half of them, less than a quarter? 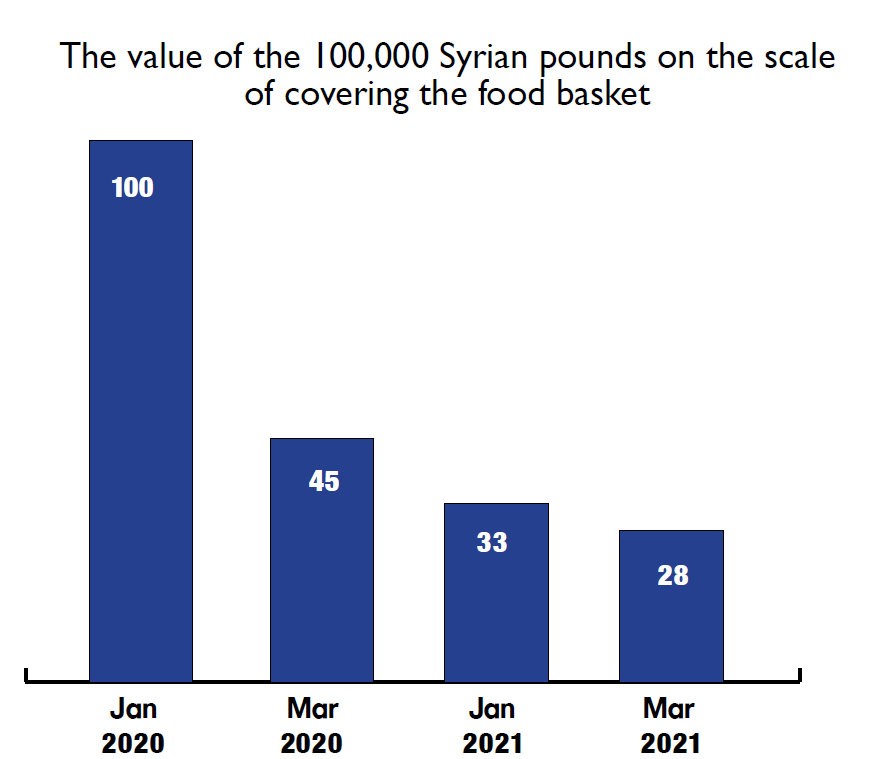 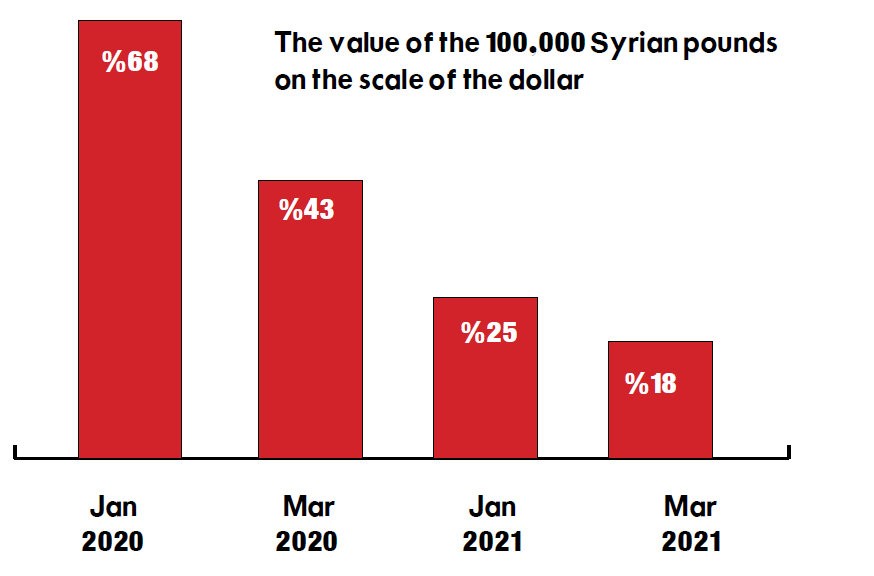 The last three months are a record rate!

During the last three months, the value of the Syrian pound has flopped in exchange for the dollar, and record increases were recorded in a short time. Afterwards, the price has returned to a rapid decline, and then to gradual increase. In sum, the Syrian pound has lost during the first quarter of 2021 nearly 16% of its value in exchange for the dollar.

So, instead of covering a quarter of the needs, the 100 thousand Syrian pounds now only cover less than fifth of them!
This indicates a significant increase in the fragility of food prices, which are no longer only related to the increase of the dollar price, but are skyrocketing at rates that are higher than this increase. The dollar, which is included in 80 – 85 % of the costs of local food production that includes vegetables, fruits, meat, poultry, and others, according to the statements of the minister of economy, is no longer sufficient on its own to explain the increase in food prices. The increase is not an increase in costs as much as it is a decrease in offers and quantities, bottlenecks in the abundance of material, and stockpiling of commodities and basic food production requirements. This, of course, is not done by farmers and breeders who fear that their materials will accumulate, and need to sell them in any way possible, rather it is the result of import cycles, wholesale trade, export, and smuggling.

The disparate increases in the prices of these food commodities indicate that there is a different supply situation, a monopoly level, and pricing mechanisms to each one of them. So, when the international prices of coffee and tea are close, the huge difference in changes of its local prices is related to the level of monopoly on their supplies, and the nature of resources that they are imported from. When the prices of imported grains, such as rice, have increased by 20% worldwide, while the prices of imported oils have increased in the world market by approximately 120%, then this cannot explain the increase in the prices of oils in the local market by more than 6 times, versus the increase in the price of rice by two times and a half. The explanation is in the situation of monopolizing the supply and production of oil industry requirements. Vegetables, fruits, and meat, which are considered local products, have increased at rates that are higher than imported elements, such as: sugar as a determinant for sweets, and rice as a determinant of imported grains. These discrepancies explanations are found in the lack of quantities, the activity of import and smuggling, and the level of monopoly, and they are all factors that have no relation to the dollar, or the sanctions, or the increase in world prices of material and shipping, but they are rather related to the heart attack affecting Syrian production, and to the level of concentration of funds in the monopoly of basic needs. 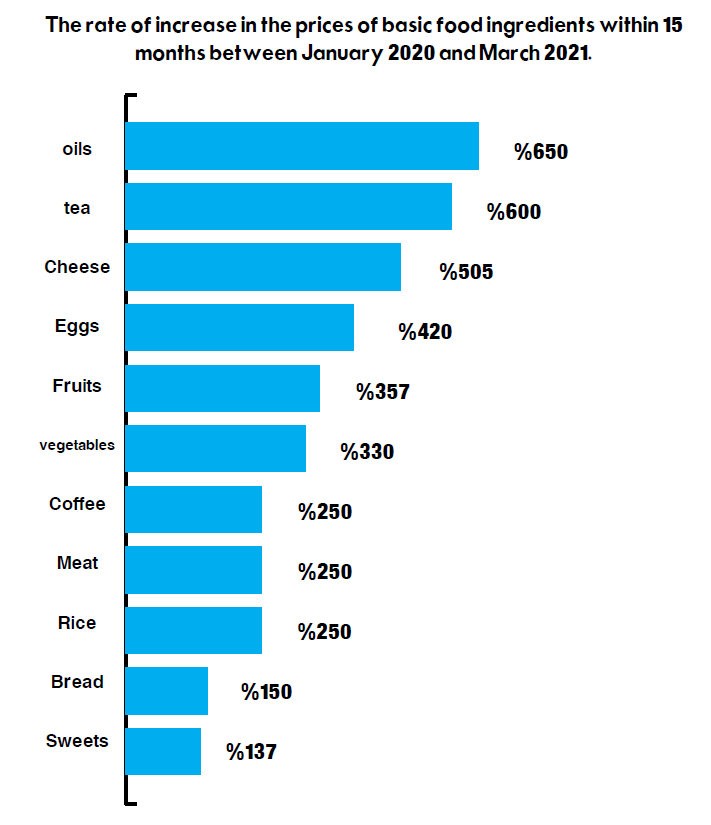 Last modified on Friday, 16 April 2021 15:13
arrow_forward Astana Should Move Beyond Itself, Quickly! The Trading of Slogans arrow_back