When the number 3500 billion SYP is mentioned in the budget, we are talking about 40% of total government expenditure for 2021. It’s the most important expenditure bloc in the budget, which is a normal thing because it reflects the significance of the energy sector and securing essential food at least, i.e., it is the sum that expresses the continuance of securing the essentials for living, as the confusion in dealing with subsidies, rethinking about them, and trying to reduce them, is a major part of the crisis of the decline in the means of life support inside the country.

3500 billion Syrian pounds is a large number for what is called “social subsidies” and the expenditures of price fixing in the Syrian budget. The government is always busy talking about this sum, and repeating the details of its disbursement: “we spent such-and-such on bread, such-and-such on diesel oil, such-and-such KWh on electricity, sugar, rice, etc.” to prove to its citizens the burdens and costs incurred by the public finances, while they (always complain)! Although, details say that the government is making an exceptional effort in saving this sum and not spending it, and it is not of the size mentioned.

It is normal for spending on energy and bread, as a major part of subsidies, to be more than three times the bloc of public wages and compensation: 1020 billion, in addition to twice the bloc of investment expenditures: 1500 billion. So, when public policies set a primary goal to reduce the amount of expenditure on those essentials, we will witness major crises like the one we are witnessing today.

Reducing Electricity, Diesel Oil, and Flour reduces a Quarter of the Subsidies!

Social subsidies are not practically spent unless subsidized materials were produced or imported, especially energy and bread products. Hence, when the amounts are reduced, subsidies are reduced too. This is what happened and what is still happening, and we will mention below government statements and daily facts which illustrate that the smallest estimate of the savings achieved in the subsidies’ bill exceed 930 billion Syrian pounds, which the government saved from reducing the production amounts of subsidized materials:

Second: Government talk about distributing heating oil only for an average of 40% of families across the country, i.e., saving 60% of diesel distribution allocations, which saves approximately 650 million liters annually. This means reducing the subsidies bill by approximately 530 billion SYP, also based on the estimates that the cost of 1 liter is 1000 SYP, and we pay 18% of it on average. As for bread, it is not possible to reach an accurate estimate of how much it declined, however, there is no doubt that the quantities of producing government bread have decreased by significant proportions. Reducing the weight only contributes to reducing the quantities of subsidized flour by 15%. Whereas, reducing allocations has been done with a mechanism that keeps the average share per person stable. Nonetheless, flour supplies to bakeries have reduced, in addition to the number of individuals entitled to receive bread from government bakeries or from the “accredited agents” that the government gave them the authorization to sell bread. If savings were only 20%, then we are talking about savings in subsidies that also approximate 200 billion SYP, based on the cost of the bread bundle which is 650 SYP, which we pay 15% of its cost. From reducing these three aspects only, and with a preliminary approach, it can be revealed that 930 billion SYP from subsidies have been saved, which means, a quarter. This is in addition to the savings from selling gasoline at almost liberalized prices, increasing the prices of subsidized gasoline and reducing its quantities, reducing the quantities of household gas, and other stuff. 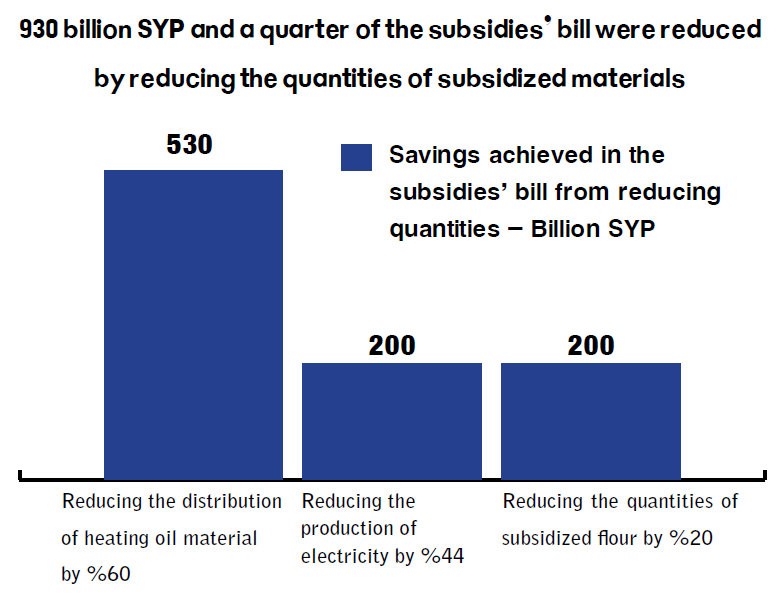 47% of the Subsidies Bill is Revenue for Extractive Industry!

The government can mitigate the burden of the bill, because facts state that a significant part of it is paid to the government by the government! It turns from a cost on government agencies to an important profit for other agencies which finances the revenues of the budget. Practically, 60% of the energy available for consumption in Syria in 2020 is locally produced; 48% of gas and 12% of locally produced oil. The costs of these on government producing agencies in the Ministry of oil was approximately 10% of its price, and the remaining 90% is paid by the Syrian Company for Gas and Domestic Oil Refineries as a profit for the Ministry of oil, which is responsible for oil extraction.

This means that the bill of electricity subsidies and a part of oil derivatives can be reduced by approximately 80%, if not more. The cost of subsidizing local energy production is the same as the revenues and the registered profit of general extraction industry, whose estimates in the 2021 budget reach 1664 billion SYP, equivalent to 47% of the subsidies’ bill. The actual bill of subsidies may not exceed 1830 billion SYP, which is paid by the government in 2021, and this is if the quantities did not also decrease, as they did last year, and as evidenced by the scarcity of the materials today! 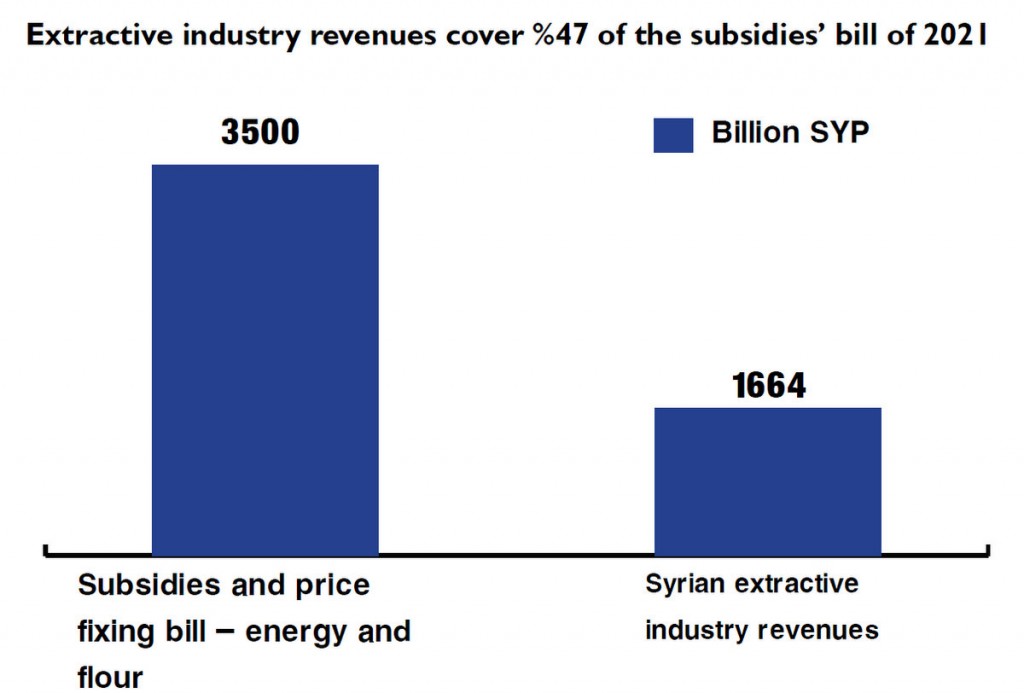 Last modified on Saturday, 20 February 2021 21:55
arrow_forward What’s the Real Objective from the Zionist Assaults, and What’s their Deep Meaning? What Will the “New” US Policy in Syria Look Like? arrow_back