Official Statement by Spokesperson of People’s Will Party

The leadership of People’s Will Party has read the joint statement of the delegations of the Kurdish National Council and the Kurdish National Unity parties, issued on June 16. As the leadership of People’s Will Party positively evaluates this preliminary statement, it sees it as a precedent and step forward on the path of establishing a mentality of consensus between the various Syrian political forces, who differ in opinion and agree on the ultimate goals in preserving the unity of Syria and its people, which have greatly suffered for decades from the mentality of exclusion and not recognizing each other.

People’s Will Party looks forward to the continuation of this a process, in a way that is based on a voluntary internal self-motivating mechanism away from any guardianship or external dictation, on the path to restoration of Syria and the Syrians for their full national sovereignty through the full implementation of UNSCR 2254, which essentially means enabling the Syrian people to practice their self-determination.

People’s Will Party also looks forward to the completion of the dialogue processes, not only between the Kurdish forces, but also between the whole Syrian forces in general, in a way that leads to the removal of any ambiguities, misunderstandings or political exploitations, that may occur outside the patriotic frames, of such broad terms and headings as “federalism” and “decentralization”, which should be avoided and abandoned, while attention should be paid to establishing tangible joint visions that serve the unity and territorial integrity of Syria, both as a soil and people; for Syria being united both actually and nominally, requires a new model that fulfill a rational and strong centralization of the state, with broad decentralization of its regions, that permits the people to practice their real power on the ground. A broad decentralization without a strong center means non-state, while a central state of the past model which is excessively centralized without real powers for the people in the regions, means creating conditions for instability leading to collapse.

Hence the importance of the participation of all Kurdish political forces, on a par with the whole spectra of the Syrian people, in the political process on the basis of UNSCR 2254 without excluding anyone. Therefore, we have been calling from the first moment, and we are still calling, for everyone to participate in this process, including the Constitutional Committee approved and supported by the United Nations, and this provides a guarantee for a successful political process and for a safe exit from the crisis, in a way achieving the interests of Syria and all Syrians. 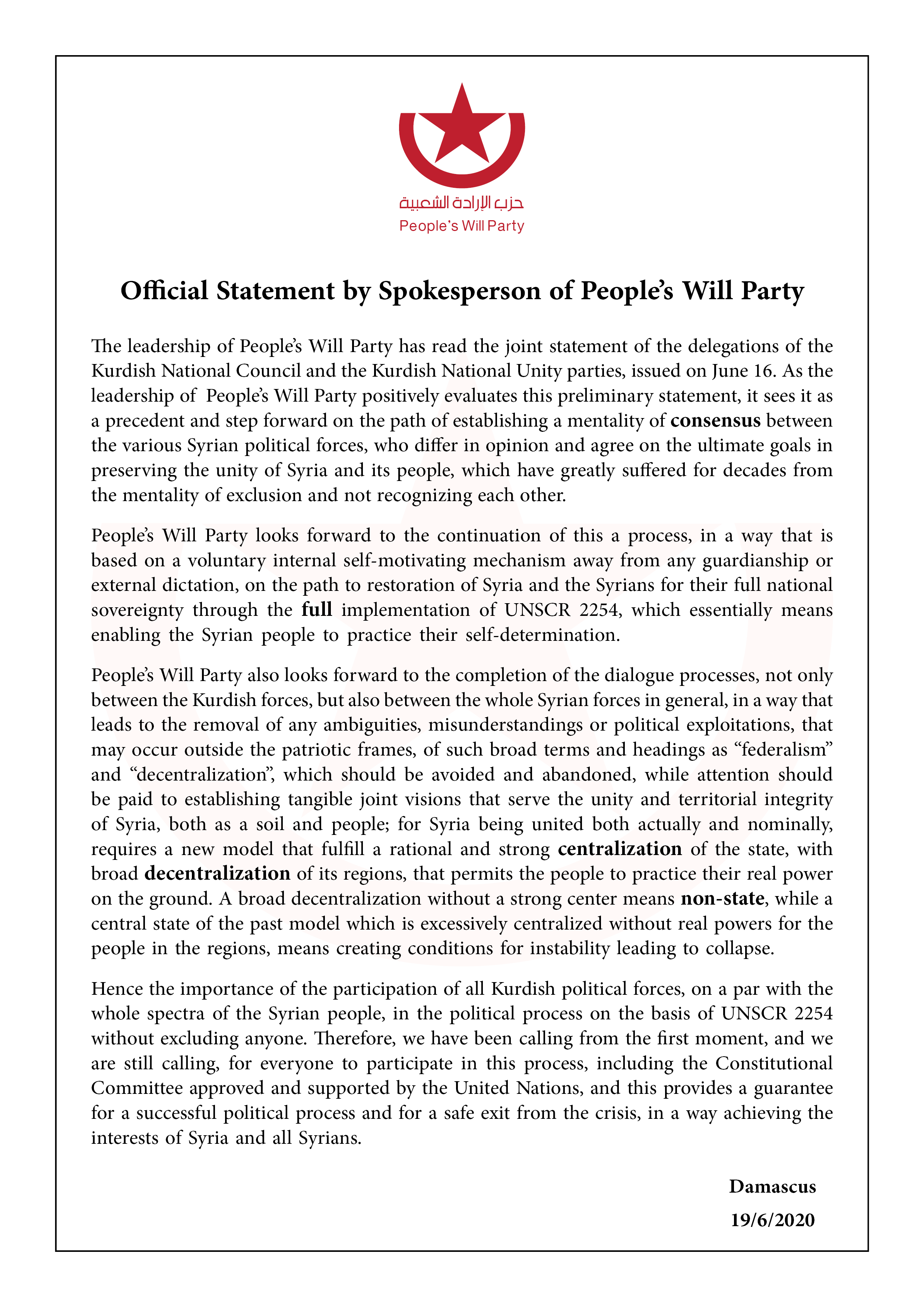 The Syrian opposition’s Front for Change and Liberation condemns the «agreement» announced today between the United Arab Emirates and the Zionist entity under American patronage.