Regarding The “National Security Theory”

It may seem an extreme luxury to talk these days about a “national security theory” for Syria. The way countries and peoples formulate their national security theories usually takes place in a long-term cumulative manner, and takes into account a large number of internal and external factors. These factors include economic security with its many variables, social security, and the security of the near and far borders. Thus, including regional and international positioning, and the nature of relations with the near and far neighbors, including hard and soft tools to maintain that security: military, economic, political, diplomatic, cultural, etc.

This all seems to be a luxury in the current Syrian situation, because examining any of the hypothetical theoretical aspects of our national security will reveal that it is in a very weak and fragile state. Those aspects are even becoming more fragile with each additional day within the disaster that remain till this moment suspended without a solution. This makes the goal of stopping the state of deterioration and decline at the limits it has reached, the only effective starting point for building national security and building a theory therefor.

Nevertheless, having a preliminary conception of a national security theory for Syria is indispensable, particularly in circumstances of the struggle for survival that all of Syria is experiencing as a country and as a people. Understanding the general map of our national security directly affects not only the general policies of the various political and social forces, but even their daily behavior, and subsequently affects the battle for survival itself and its results.

What we will attempt to do here of course is not to formulate that theory, because that is a task much too heavy for one individual or party to undertake. This rather requires massive collective efforts by specialists in absolutely all fields. It suffices here, within the limits of our understanding and in an even non-systematic manner, to shed some light on the broad outlines of the issue. Let’s start with Syria’s particularity, and our region’s particularity in general.

A simple review of the history of the Levant, that is, the area currently occupied by Syria, Lebanon, and Palestine, in addition to Jordan, reaffirms what is known and clear, which is that this region throughout its history has been the epicenter of major conflicts. It has also been the border between empires, and a route for trade among them at the same time, so much so its security theories revolved around the external aspect of its relations, far more than internal aspects.

The first world system that appeared on the face of the planet is the system that emerged with the emergence of capitalism, rather it is capitalism itself, with its accompanying colonial expansion – militarily, economically, and culturally.

Prior to capitalism there was no world system that encompassed the entire globe. Systems were local in nature, regardless of how far that “local” area extended, including historical empires, even the largest among those.

Even though what we have said may seem one of the well-known and common axioms, nevertheless, recalling it is necessary to build on in three main directions:

First: To neutralize ideal and flawed notions about the supposed neutrality of our region as a whole, and of Syria implicitly. Whether we see it or turn a blind eye to it, the conflict is ongoing and aflame. Thus, we are either an active part within it, seeking to direct it towards our interests as peoples and countries, or we just become a victim of it.

Second: Active participation in the conflict, from the point of view of preserving and bolstering national security, is not according to one formula that is valid for every time and place. Rather, it requires a deep understanding of the existing conflict in each of its historical stages. In certain stages it requires balancing the interests of the major contenders, and in most other stages it requires a decisive stance on one of the two banks, with which our interests profoundly intersect.

Third: Actively standing on one of the two banks, or trying to balance them, should be based on a clear distinction between national security and the security of the ruling regimes. The security of the latter sometimes converges with national security, and at other times completely contradicts it. The regimes may actually be on one of the two banks, but the one that is contrary to the interests of the people and the concerned state; sometimes, the regimes may try to balance between the two banks to serve their interests and continuity, while being against the interests of the people and the state; or, the regimes can stand on the right bank in the historical sense, but as a tool to unleash its hand internally to serve its interests and against the interests of its people. Perhaps one aspect of what we see in Syria today, and in several neighboring countries, is this contradiction between “regime security” and national security, and that is regardless of the formal alignment within the international conflict, because the actual alignment is primarily with actions and not with words. In a word, the correct international alignment is a necessary condition within the theory of national security, but it definitely is not a sufficient condition. 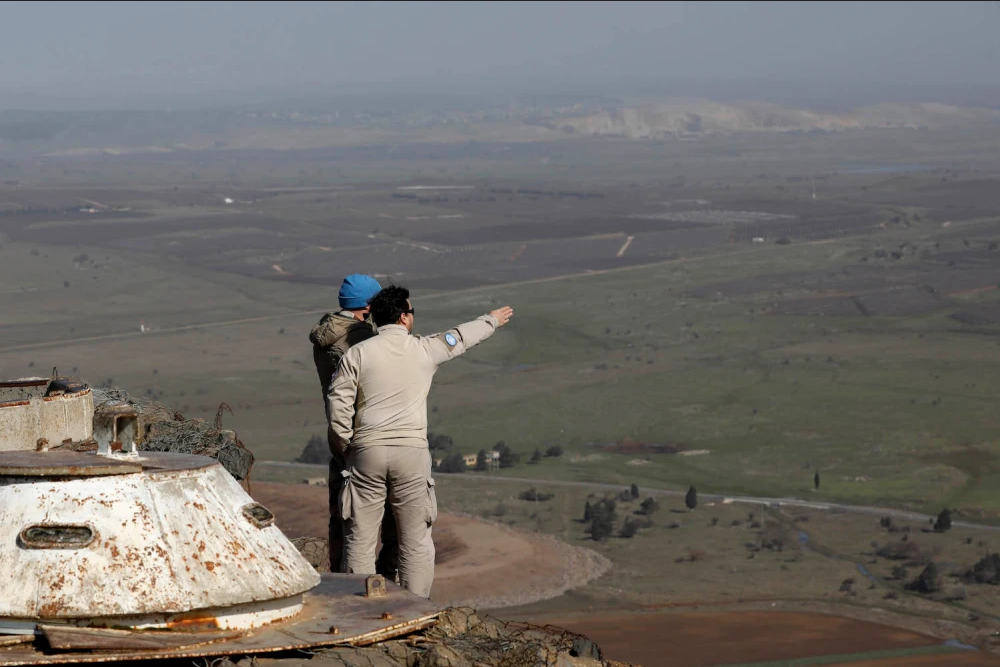 The international conflict in its current stage is between two projects, more than being between two camps:

The first/Western project is the continuation of geographical, political, and social fragmentation, as a tool to continue and deepen the plundering, and as a tool to maintain a world order based on plundering, the dollar, and unequal exchange. This project, and because those who own it are beyond the seas, includes the disintegration of any natural land connection between the three continents of the ancient world, and our region is the heart of that connection. Therefore, it is not surprising that sabotage operations are concentrated within it, and the most important of these operations is the establishment of the Zionist entity. The process of sabotaging Syria internally and externally may have become the most dangerous contemporary carrier in our region for this project, which does not in any way reduce the danger of the Zionist entity, but it defines its function in a concrete way that is directed towards ending Syria in particular, as it is his number 1 task.

The second/Eastern project contradicts the first, as its rise is governed by ending unequal exchange, the dollar, sabotaging land connection, and the chaos in our region. As for ending unequal exchange and the dollar, because the countries of this new project have their need of resources, production, and technology, and they are plundered on a daily basis by the West, which to a large extent does not possess the resources or even the production, but rather the international financial and political system that steals others’ wealth and labor. As for the land connection and stopping the sabotage and chaos, the heart of the process of completing the rise of the Eastern project (or rather it is a new comprehensive world project), is primarily the stability of land transport and trade lines, especially in our region, with the stability this requires in its various major implications and infrastructure with the comprehensive development it carries therewith.

It is no surprise that the existing regimes in our region have come to power and fixed themselves in it at a specific historical stage, which is the stage of the decline of the Soviet Union, and the retreat of the “Eastern project” with it. This was also during a stage of liberal and neo-liberal Western advance. Most of them, regardless of their slogans, stood in the practical sense on the western side of the project, from the point of view of “regime security” and not that of national security.

Perhaps one of the clear examples of the distinction between “regime security” and “national security” is the way in which the four regimes in each of Turkey, Syria, Iraq, and Iran dealt with the Kurdish issue. Although there is a distinction in the issue itself among these countries, and in the extent to how badly those regimes deal with it, which is undoubtedly the worst in Turkey, where the objective weight of this issue is immeasurably greater than in the other countries; nevertheless, keeping this issue unresolved in Syria for decades, was and still is a threat to the country’s national security.

We should remind here that this issue is an example of one aspect of social security within the comprehensive concept of national security, and it is one of many aspects.

It can be said that the method of distributing development in Syria, over the decades, has worked to establish Damascus and Aleppo as centers versus marginalizing the rest of the country as a whole. One of the main objectives of this process was the extreme control of the plundering channels, starting from the al-Hal markets all the way to the government centers, development projects, and the method of controlling underground resources.

With time, this process perpetuated the feudal isolation that lasted even after feudalism ceased to exist. One of the secondary indicators of that is the relatively wide difference among the dialects and traditions in the various Syrian areas. This isolation, in turn, in many instances elevates the sub-national affiliations – whether sectarian, religious, tribal, or even neighborhood-based – above the national affiliation, and essentially hinders the crystallization of an all-inclusive national identity.

Perhaps the biggest wrong committed against this country and its people, are the continued efforts to reduce the image and truth of the figures of the Great Syrian Revolution, from national figures to local and sectarian leaders.

Some are still proud of the strategic wheat stock of the past, as if that sums up the concept of economic national security.

As important as this stock is, when it was available, it is at the end one factor of a very long list of requirements for socioeconomic national security. We will list very briefly some of them:

All of the above is nothing more than a few preliminary outlines within the comprehensive formulation of the concept of national security, which we need extensive and intensive work on, and starting from now. Because working on it and according to it, is needed in order to reach the safety shore in the struggle for survival that the country and its people are experiencing.

arrow_forward Regarding The “Misunderstanding” Between Syria and Turkey De-Dollarization of the Global Economy: No Longer a Far-Fetched Issue arrow_back