In Time of Lifting Subsidies: How Much Did Private Banks Earn in One Year?

Since the announcement of lifting subsidies away from strata of the Syrian people over the past months, the government has spared no opportunity without announcing that the Resolution of lifting subsidies is a result of its desire to repair the budget deficit, pointing out in several ways to the difficulties the State is facing due to the scarcity of revenues. In short, the government has used every way to justify reaching out to the pockets of citizens, citing its lack of options to increase the State’s revenues, and ignoring – at the same time – the coplaint that is arising to point out to profit positions that are still present in the country and are more useful to be a source for increasing the State’s revenues. In the following, Kassioun reviews one example; the profits of private banks operating in Syria during the past year.

The financial disclosures have recently been issued by private banks operating in Syria (14 banks) about their initial profits achieved over the fiscal year 2021, revealing new evidence that there have always been several options for decision-makers in the country to increase the State’s revenues without reaching out to the pockets of citizens. This is, of course, if there was a political decision to direct taxes to the major wealthy who are benefiting from the collapse of the Syrian pound.

1,1 Trillion Syrian Pounds the Profit of One Year

According to calculations in financial disclosures, the 14 private banks listed in Damascus Securities Exchange have achieved profits of 1,1 trillion Syrian pounds, that have increased from 650 billion Syrian pounds in 2020. Hence, banks have achieved a significant profit, despite its decline when compared to the US dollar (the profit of 2020 has reached about 517,515,924 USD, while the profit in 2021 was about 474,130,048 USD).

In this context, it should be recalled that the announced profit figures cannot be relied upon, as it has become known that banks have many ways in which it can circumvent announcing the real profit figure, not least by inflating the figures of operating expenditure in order to reduce the actual profit figure. Henceforth, we can imagine how much is being manipulated under the absence of effective financial control mechanisms of the performance of these banks. However, even if we wanted to rely on these same figures, they reveal to us part of what the government is neglecting from sources of due revenues, and that is attributable to the tax system in Syria that wastes the main sources of the State’s revenue, which we will explain later.

As mentioned above, tax system in Syria allows for the major wealthy an exceptional income tax, including the income tax on the profits of private banks. Income tax on operating profit does not exceed 25%, a rate that is surprising if compared to the same rate in other countries: the rate in Algeria and Jordan is no less than 35%, while in Egypt it reached 45%. That is, the government in Syria annually waives a rate of 10 to 20% of the taxes that can be imposed on the profits of private banks.

Moreover, the Central Bank of Syria took an unfair step against Syrians who should be benefiting from public money, when it considered that the profits of banks resulting from the evaluation of foreign exchange (exchange profits of foreign exchange) were unreal! That means they are exempt from government taxes, and here we are not talking about marginal differences, but differences that make up more than 90% of bank profits!

What if Taxes were Levied as Should Be

Taking a look at the taxes paid by each bank of the private banks in Syria shows that the majority of these banks did not pay more than 2% of their total profits, and that the proportion of total taxes collected by the government from the total profits of private banks is no more than 4% (48 billion SP out of 1.1 trillion SP!). At last, we leave the reader to the question: what can we call the policy that contributes to the accumulation of billions of Syrian pounds in banks without seriously investing it for the benefit of people? In addition to that, they are being accumulated without effective taxes, and are left to benefit from the losses of the Syrian pound that are exacerbated due to the policies of the government. 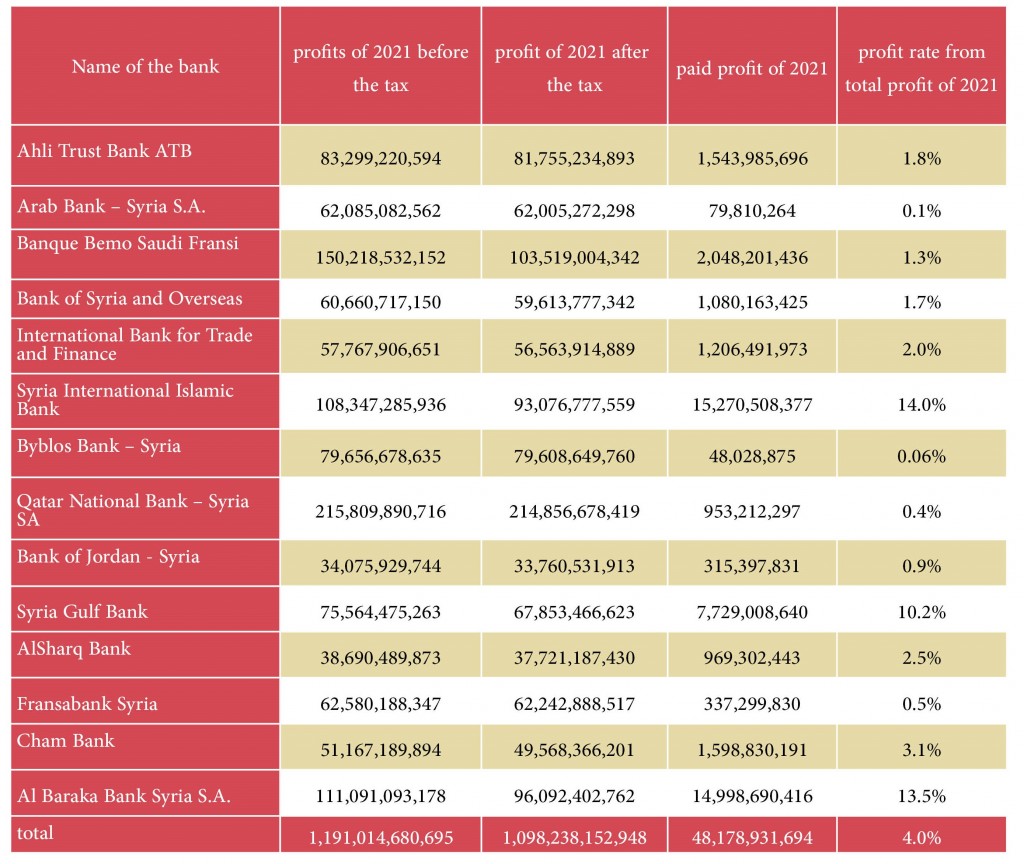 arrow_forward From the Sequestration of the Syrian Pound to its Release; towards further Public Impoverishment What Lies Behind “Israel's” Desperation to Play the Role of “Mediator” in the Ukrainian Crisis? arrow_back