Electricity; A New Partial Privatization about to Be Completed.

The general orientation of the government towards the privatization of public sectors has become clear during the last decade, directly and indirectly, including important and sovereign sectors. The models of privatization of many establishments have also increased in recent years to take an abrupt form in 2021. That was through affecting the hall of Syrian Trading, the last of which were electricity and industry sectors, under pretexts that the government contrives and supports with its unprecedented resolutions. This is all to serve the interests of the plunderers who are plundering citizens and national economy, and the worst is yet to come!

This parallels with the series of reducing subsidy and successive price increase, which has reached the point of unfairness against citizens. These causative factors altogether increase the act of crushing the citizen one day after the other, all of which with premade justifications, such as “siege and sanctions – the increase in prices of international shipping and transportation – lack of economic feasibility, etc.”

The Project of Purchasing Electricity

It is clear from the government data about the situation of the electricity sector that this sector will not be excluded from the scourge of privatization, which will strike it to doom the citizens little by little. During the last month, 3 resolutions have been issued, the first of which was: amendment of the electricity consumption tariff issued by the Ministry, as the costs have increased for energy consumers by approximately 800%. Then, it was followed by: the amendment made by the Ministry of Electricity on the resolution of exempting industrialists from the rationing of electricity issued in 2016, as the new tariff has become 300 SP per 1 KW-h, when it used to be 42 SP per KW-h. As for those partially exempted, it is set at 225 SP per KW-h, and they include industrialist consumers in industrial cities in Adra, Hassia, Sheikh Najjar, and the public sector establishments. The last one was: Legislative Decree No. 32 issued on the 28th of this month, which is considered a legislative gateway whose epitome is the privatization of electric power production.

Eye on the Previous Resolutions and their Consequences

The aforementioned amendments tell us that whoever has money gets electricity without rationing, or else, will live in the unjust hours of darkness. The last one was Decree 32 that was amended regarding the amount of produced capacity at 100 MW and more, which the government left open, and did not specify the investors either, which means investing parties may be “local or foreign”.
Such Decree opens the door to immense privatization of the electricity sector, especially that it did not oblige investing companies to a certain amount of capacity, instead, it left investment open, and this is if it was currently under the conditions set by the Public Establishment of Transmission and Distribution of Electricity and with prices determined also by it. This will later increase the number and size of the companies investing in the sector, which means that they will be in control of the production of electric power given the increase in their production first, and the failure to establish additional government power plants to cover the deficit in production in order to meet the actual need. As a result, things will turn out in their favor, and they will take the whole role in the cycle, from production to distribution, transmission, controlling sale price and maybe even taxes. In other words, they will turn from being investors to a major owner of the sector of electric power. This is what experiences have taught us if we take a look back to the experience of privatization that affected the sector of telecommunications through cellular telecommunication companies, or internet service providers, which now share profits with the telecommunications sector, as the largest part of their profits goes in the pockets of major investors, and at the expense of the beneficiaries of its services.

Amps are going to get more vicious

Amperes too, are a good example of the hidden privatization that the government intended to project on the electricity sector in some regions, from which the people of Aleppo governorate have been the most affected since the beginning of the crisis and until this day. The suffering extended to the people of some of the regions of rural Damascus as well, in addition to some other cities to varying degrees. Responsible authorities have withdrawn from solving the problem of the people, leaving them under the control of the merchants of amps, as they are the ones in charge of the processes of distribution, transmission, pricing, and taxes, away from censorship or legal liability. So, it is obvious that with the recent amendment to Legislative Decree No. 32, the power of ampere merchants will increase, and perhaps their business will keep on expanding under the absence of the role of electricity establishments almost entirely.

Electricity 24/7; What About the Cost?

As a result of the amendment made by the Ministry of Electricity on the resolution of exempting industrialists from rationing of electricity, the new tariff has become 300 SP per KW-h, after it used to be 42 SP. Despite the resolution and its high cost per KW, the ability to benefit from the middle classes of industrialists is kind of impossible, given that the cost of each KW from these lines is about 300 million SP according to the current costs, distributed over about 100 million SP for the transmission center, about 90 million SP for the electrical cell, and 120 million SP the cost of a 1 Km long cable. The remaining and most important aspect of the amendment is: the marketing by the government of the cost per KW of 315 SP, and promoting the difference between the cost per subsidized household KW and the cost price paid by the government, especially after legalizing the privatization of electric production through the Decree No. 32 in order to be invested and sold, perhaps according to the current price set at 300 SP per KW.

The most important question remains: is the cost per KW set at 315 SP that official statements are talking about is real? Or is it a justification for a new legalized door to plundering? After comparing between the prices of the KW with neighboring countries with similar conditions according to Global Petrol Prices website, we find that the average household KW locally, estimated at 32.6 SP on average, is considered the highest cost according to the following table: 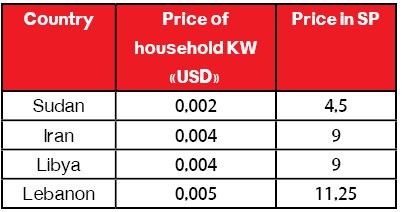 As for the price of the industrial KW locally set at 120 SP, its cost is higher than the following countries according to the same website: 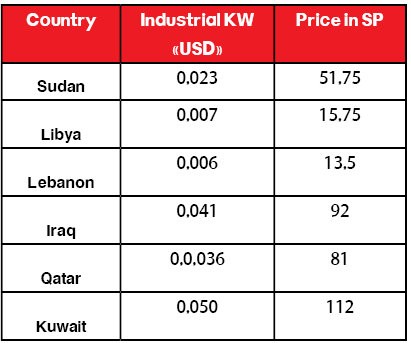 The Citizen, reducing Subsidy, and Privatization

A decade ago, responsible authorities have never hesitated to seize the opportunities to implement the policy of reducing subsidy in its different forms, starting from LPG, fuels, food supplies, and even electricity and education. In addition to the latest study conducted by the government to determine who will be excluded from full subsidy, without having clear alternative plans that can save citizens from the scourge of extreme poverty, which the government have brought them to using contrived ways. Hence, it increased the opportunities and amount of plunder in favor of the money moguls who are entrenched in the government’s official resolutions, as if the government imposing on citzens to "tell the water not to be wet!", while it continues all this through the process of privatization, whose bill will be paid by the citizen and the national economy.

Last modified on Tuesday, 28 December 2021 13:31
arrow_forward Where is the Process of “Changing the Regime’s Behavior”? Context... Tools... Results Kazakhstan and Its Consequences: A Preliminary Approach arrow_back

Kassioun Editorial 1102: End of a Year and Beginning of Another