Where is the Process of “Changing the Regime’s Behavior”? Context... Tools... Results

Indications of Western action and pressure continue to emerge within the so-called “regime behavior change” policy. While previous Kassioun articles have focused on the general objectives of this policy, it has become useful, with the clarity of additional parts of the picture, to try to go into more details of this policy and its mechanisms, not just its final objectives.

Before going into details, it is important to place the policy called “regime behavior change” within its historical context relating to the Syrian crisis and its development; because defining the time frame in which this policy appeared is a prerequisite for understanding its objectives, and it can perhaps alone be almost sufficient to capture an important part of what it really is.

If the popular protests began to emerge at the beginning of 2011, under the influence of a number of internal and external factors, the most important and biggest of which is the deteriorating socioeconomic and political situation over decades in Syria, then dealing with it as a mere “external conspiracy” that should be fiercely eliminated opened the door to more foreign interventions, primarily Western.

Whether at that phase or before it, the continuation of Syria as a geopolitical unit was an obstacle to Western policies in the Middle East as a whole, especially with regard to the Zionist entity. After the US retreat started emerging clearly starting from the financial crisis of 2008, the major repositioning policies that the US started since, necessarily required going to the end in the “creative chaos” project, which bears major overlaps with the “New Middle East” project for the Zionist entity, best expressed by Shimon Peres in his book bearing the same name.

As the crisis in Syria deepened, it can be said that a few months after the protests in which the great majority of people spontaneously participated, and when the war phase began, the country has gone through the following basic phases during the past ten years:

This phase extended from mid-2011 until the end of 2015. The declared Western slogan was “departure” and “overthrowing”. As for the tool by which the overthrowing was to be achieved in the end, was not the “rebels” or “opponents”, but the directly obvious terrorist tool, such as al-Nusra and ISIS. Overthrowing the regime within this scenario was nothing more than a side-effect of a larger and more effective process, which is the overthrow of the entire state, and getting it to a point from which it cannot rise afterwards for many decades to come.

This phase extends from the end of September 2015 to the end of 2018. The slogan of overthrowing the regime continued, but gradually began to fade. Since mid-2016, we started intermittently and sporadically hearing, starting from the British, a new slogan: “changing the regime’s behavior”.

What happened during that phase is that the direct Russian military involvement in the battle, and with its results gradually emerging, had blocked the possibility of achieving the first scenario, so it was required to move to a new scenario that would eventually achieve the same initial objectives.

The scenario that was adopted since that moment was the “military attrition” scenario, which intended to drain Syria itself on all fronts – i.e., drain loyalists and opponents alike; drain the country’s resources, capabilities, and the capabilities of its people; all the way to draining it of any power and preparing it for a complete collapse. This also included attrition of the West’s opponents: Russia and Iran.

As part of this scenario, the West had to accept the idea of a political solution and to abandon, at least in the media, talking about “the regime’s departure” and overthrowing by force. This opened the door for passing Resolution 2254, which the main Western task after its passage was to prevent its implementation.

This phase extends from the end of 2018 until now, and overlaps with the fourth phase, which we will cover next.

The most prominent thing that happened during this phase of the crisis is the formation of the Astana trio, which was able to achieve what the 2016 Lavrov-Kerry agreement for ceasefire did not achieve. Astana, which was formed at the end of 2016, managed, and in about two and a half years, to bring the country to a state of almost comprehensive ceasefire, which has been ongoing for nearly two years.

As it became clear that the scenario of military attrition had reached its end, it became necessary to move to a new scenario, represented by “economic attrition”. The banner of this scenario was and still is the Caesar Act, though it is not the only one in the series of sanctions, but it carried the symbolism of the transition to a new policy.

The political structure, which is filled with massive corruption in Syria, helped transform the economic aspect in general, and Caesar implicitly, into a weapon of mass destruction directed at Syria and the Syrian people. Sanctions themselves turned into a tool in a comprehensive restructuring of the Syrian economy, to turn into an economy of mafias, corruption, contraband, aid, and transfers, in parallel with the gradual but rapid elimination of all productive aspects of this economy. 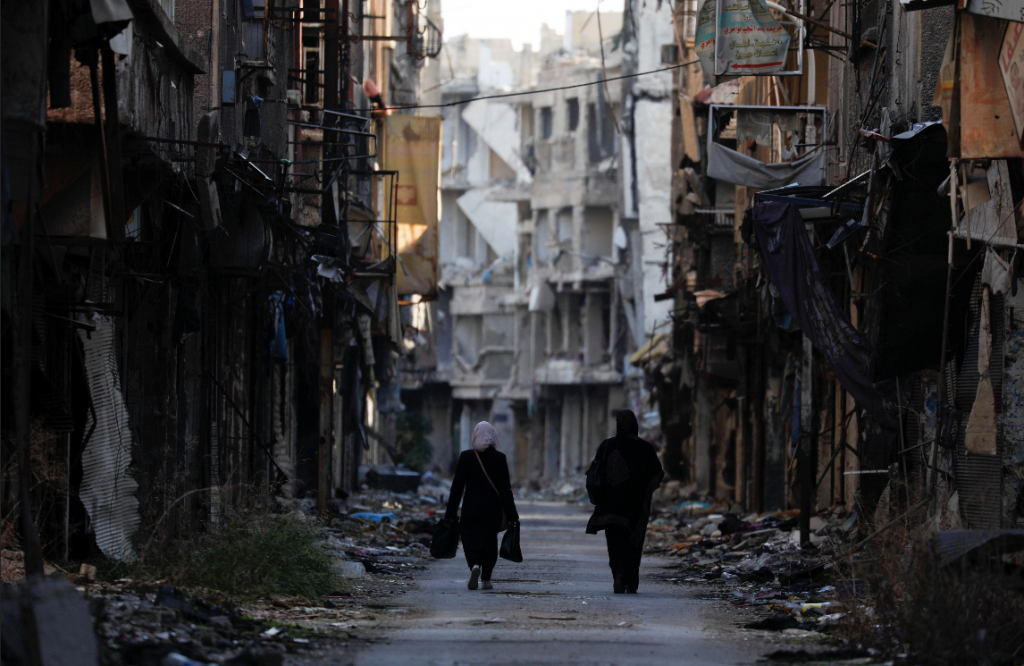 This aspect alone has effects that deserve in-depth studies. It suffices to say here that preparing any society towards transitions and displacements that overthrow all its history and principles begins with measures of this type economically, with all it carries of violent destruction of the structure of that society, not only the tangible material one, but also the intellectual, moral, and cultural. In a word: the shift of the economy towards highly underproductive, highly corrupt, high criminal, and black patterns can destroy and fragment the spirit of an entire society, reaching its smallest cells, including their concepts and beliefs.

Going back to the start, economic attrition is also not a standalone policy without specific objectives. Rather, they are the same initial objectives, added to which is the increased American and Zionist need to achieve “final” and quick arrangements in the region as a whole, within the great American policy of repositioning, which is governed by the bigger battle: with China and Russia externally, but more importantly with the internal American economy wheel that has entered a deep crisis that threatens the US itself before anyone else.

Therefore, this stage witnessed withdrawing from circulation once and for all the slogan of overthrowing the regime, and the predominance of the slogan “changing the regime’s behavior”, which now carries the same previous objectives within it, albeit with some modifications here or there.

The phase of the “behavior change” policy cannot be considered a separate phase in itself. Rather, it is in one way or another part of the attrition policy, and perhaps it is, more precisely the culmination of that policy. That is, after the attrition has reached its full extent, ending it becomes conditional on the fulfillment of the conditions the West wants, that is, by achieving its objectives.
It is not difficult to notice that the phrase “normalization with the regime”, which is being used in the media to express attempts at rapprochement between the Syrian regime and some Arab regimes, is not outside the general context of the policy of behavior change.

Among the indicators that Kassioun pondered at length was the so-called “Arab Gas Pipeline Project”, which Kassioun’s studies have shown indisputably that the Zionist is either participating therein under the table, or in the least bad case, is able to benefit therefrom to the maximum limits and turn it into part of the Peres Project for a New Middle East.

If the political solution process is still stumbling, and its disruption is led by Syrian extremists, from the regime primarily, and from the opposition in the second place, then the continuation of the neither alive nor dead process has itself turned into a tool for prolonging and deepening the attrition, leading to a “behavior change”.

If, over the past three years, we have witnessed a lot about Syria retaking its seat in the Arab League, and about restoring or not restoring official relations with this country or that, whether Arab or European, then what has become clear is that this same issue is being used as well as one of the pressuring tools alternating between carrot and stick.

The case has been the same recently with resuming talk about the “chemical weapons”, after it had almost disappeared over the past two years. At the very least, the “Israelis” did not invoke chemical weapons, but rather “Iran” in their continuous attacks on Syria, but in the last week they came back to taking this rabbit out of the hat, as revealed by Yedioth Ahronoth and the Washington Post.

We also cannot deal with Jordan’s recent claims on the water issue, which seemed to carry a raised tone, which contradicts the heaps of “friendliness” that we saw a few weeks earlier; heaps of friendliness that accompanied portraying the King of Jordan as a savior and an initiator who went all over carrying his initiative to the major countries, which listen to him, get convinced, and get behind him.

Among the tools that have become clear among the carrots and sticks, is controlling through sanctions and other things the tap of financial flows, which were and are still closed to the vast majority of Syrians, while they get decreased and increased for the elites.
What we mentioned is only the apparent of matters, while what is hidden in such cases is much greater.

Summary of the behavior change process

What is actually happening within the policy of behavior change, and away from the illusions of the elites and their narrow interests, is that the country and the elites themselves are gradually being stripped of their capabilities and competencies, and even of their friendships and alliances, so that they reach a point where they can do nothing other than accept. This acceptance is usually the last role they play on the stage of history.

Although the issue is more or less different in Syria, and it is certainly more complex, it may be useful in this context to learn from the notorious experiences of countries that have historically normalized with Zionism, as the process of normalization itself is one of the experiments that realize the Western policy of “behavior change”.

Looking at these bitter experiences by Egypt, Jordan, Sudan, Morocco, and others, sheds light on one very clear fact: conforming to the Western policy of changing behavior leads only to worse conditions for the peoples and the countries alike, and even for the “elites” themselves, which tumble or become more disposed to tumbling.

arrow_forward A Deal and a “New Resolution”… Get Wisdom from the “Quagmire Man”! Electricity; A New Partial Privatization about to Be Completed. arrow_back