7 Questions Regarding the “Arab” Gas Pipeline

The past few weeks have witnessed a lot of talk about what is being called the “Arab Gas Pipeline”, which is supposed to start from Egypt, going through Jordan, to Syria and Lebanon. Additionally, one of the pipeline’s branches will reach – according to the Egyptian media – between the Egyptian Arish and occupied Ashkelon, with the possibility of an additional branch reaching Iraq. 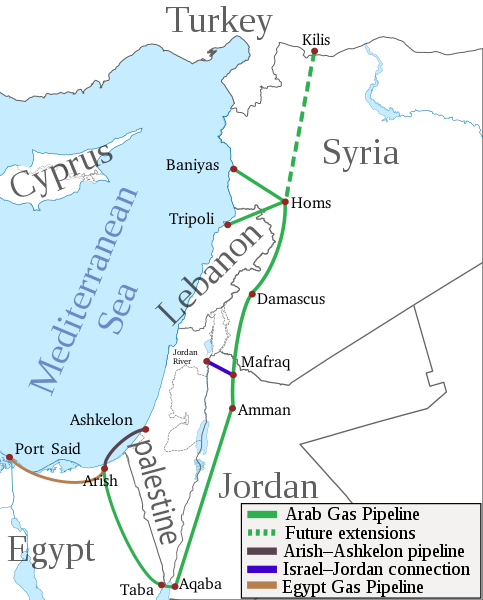 The story first appeared in the media with the statement issued by the Lebanese presidency (Arabic) on August 19, which stated that the US ambassador to Lebanon, Dorothy Shea, had called the Lebanese president and informed him that: “I was informed of a decision by the US administration to continue helping Lebanon in importing electricity from Jordan through Syria, by supplying Egyptian gas to Jordan, to enable it to produce additional electricity to be put onto the network linking Jordan with Lebanon through Syria. The transfer of Egyptian gas through Jordan and Syria to northern Lebanon will also be facilitated”.

These statements were preceded by the Jordanian King’s visit to Washington, in which he raised the issue with US President Biden.
At the time, and because it coincided with talk about the Iranian oil tanker heading towards Lebanon and Syria, the matter seemed like a mere tactical media maneuver. However, the events over the subsequent days and weeks made it clear that the issue was beyond that.
During the Baghdad summit of neighboring countries, which was held on Saturday, August 28, last, the French presence was noteworthy. Also noteworthy was that media leaks said that the issue of the gas pipeline was raised on the side during the summit.
Over the last few days, events have accelerated, where Jordan hosted a four-way meeting of the energy and oil ministers of Egypt, Jordan, Syria, and Lebanon to discuss the same issue.
Lebanese Energy Minister Raymond Ghajar said today (Arabic): “We are working with the World Bank to secure the right financial cover, in the event something goes wrong, as the World Bank is the one that guarantees paying correctly”.
About a month ago, specifically on August 9, a call took place between the Egyptian Minister of Petroleum, Tarek El-Molla, and “Israeli” Minister of Energy, Karine Elharrar (Arabic). According to the Egyptian Foreign Ministry, “during the phone call, there was a discussion of future plans regarding receiving Israeli gas to be liquefied in Egyptian natural gas liquefaction plants for re-export”.
For her part, the “Israeli” Minister of Energy affirmed that she hopes: “This cooperation with Eng. Tarek El-Molla will achieve success in benefiting from the capabilities and expertise of each country in order to reach energy security for all the peoples of the region”.

The whole issue raises a number of questions that need serious answers, including:
1- The project includes a definite jump over the US’s Caesar sanctions on Syria. What motivates the Americans to do this?
2- What pushes the World Bank to deal positively with the project, (according to the Lebanese Minister of Energy), which is an institution whose purposes and methods are known?
3- How can an “Arab Gas Pipeline” be understood, when one of its branches passes towards the occupied Palestinian territories, that is, towards “Israel”?
4- Looking at the maps published by the official Egyptian media, and if we set aside the branch that connects to Ashkelon, the “main artery” of the pipeline passes along the entire eastern and western borders of occupied Palestine. Can the concerned countries – and assuming that the project does not have “Israeli” approval – ensure that this geographical positioning does not turn into a tool of extortion in the hands of the Zionists?
5- Egypt ranks 20th in the world in natural gas production globally and 16th in natural gas reserves, which are estimated at about 77 trillion cubic feet and 1.1% of the total global reserves; this is according to the highest estimates, which are OPEC’s. However, if we take BP’s estimates, the Egyptian gas share drops to 0.9% of the world’s reserves. More importantly, if we take into account the domestic consumption within Egypt of Egyptian gas, the remaining surplus that can – in theory – be exported is very modest. Do these figures allow for a project of this size?
6- Is there a relationship between the “Arab Gas Pipeline” and the “East Mediterranean Gas Forum” established in Cairo in September 2020, which includes: Egypt, “Israel”, Cyprus, France, Greece, Italy, and Jordan?
7- Looking at the call last month between the Egyptian Minister of Petroleum and the “Israeli” Minister of Energy, the following question arises: Has modern science reached manufacturing filters, which can determine the DNA of gas, so that they isolate the unliquefied “Israeli” gas, and prevent its passage in the “Arab” Gas Pipeline?
All of this raises a bigger question: Has the normalization of some Arab countries with “Israel” reached the level at which “Israeli” gas reaches Lebanon, starting from Egypt, and passing through Jordan and Syria?

Last modified on Wednesday, 08 September 2021 23:12
arrow_forward The Next Wave of the Syrian Popular Movement… Small Dreams and Big Dreams! Pulling Rabbits out of the Magician’s Hat… The “Arab” Pipeline as an Indicator of the Phase’s Nature arrow_back