The Syrian Refugees Issue… Only Humanitarian?

According to the United Nations, the number of Syrian refugees exceeds 5.5 million, but this number includes only those registered with the UN, which means that the actual number is greater than that, and estimates indicate that it is about 6.6 million refugees outside the country. If we add to this number the internally displaced persons, the number will exceed 50-60% of all Syrians.

Many Syrian sides call for dealing with the issue of refugees as a humanitarian one that should not be subject to negotiations nor politicized. This is true in principle, but in practice, these same sides handle this file in a highly politicized manner.

On the side of the extremists within the regime, we see an outward and verbal push towards resolving the issue by saying that the door is open for returning and work is ongoing to secure the necessary conditions. The fact of the matter is that the actual conditions in Syria are not only directed towards not allowing refugees to return, but rather they are conditions that push Syrians remaining inside to try to find a way out of the country. It suffices to look at the disastrous living conditions that Syrians are living to confirm this, starting with the brutal prices and all sorts of crises that have left no misery through which Syrians did not go, including crises of bread, fuel, electricity, transportation, water, wildfires, etc.

If the extremists are trying to attribute all these calamities to sanctions alone, or to some financial tricks, then that is understandable and intended to disown responsibility for the great corruption, plundering, and policies hostile to the interests of Syrians. Although this does not in any way negate the essential role of the blockade and sanctions in magnifying Syrians’ tragedies and deepening their wounds.

On the opposite side, where the extremists within the opposition are found, there is a constant denial of the role of sanctions in Syrians’ crises. Moreover, those sanctions are frequently welcomed, even though their outward way of addressing the refugees’ issue is that it requires securing conditions for their dignified return. Additionally, calls for the return of refugees are issued by some of the opposition, but a return to “opposition areas” with the false claim that the conditions there are suitable for return thereto. Thus, there is a replication by them of the behavior of the extremists within the regime.

The long-term calculation that is starting to unfold based on the statements and tendencies of particular entities within the opposition, is that the pursuit is towards a political solution not based on elections in which all Syrians participate in the various regions, but on several elections – elections held by the regime in its areas to produce its government, and elections held by the “opposition” in its regions to produce its government. There are plenty of other factors for Syria to have two or three or more governments, whether we talk about the currencies, the laws, the flags, the slogans, and the school curricula. That is, there is enough to have not only several elections in Syria, but several “Syrias” within Syria!

In sum, we can say the following: the extremists on both sides deal with the issue of refugees as a political tool aimed at perpetuating the existing conditions and even legitimizing them, with the aim of remaining in their positions of control and plundering even if the price of that is to partition Syria. It can also be said that the extremists from the different sides did not and will not do anything practical to guarantee the dignified and safe return of Syrian refugees. 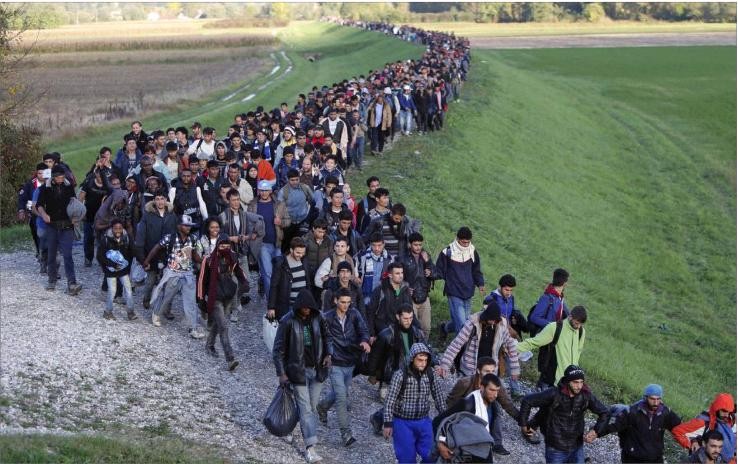 A Humanitarian Issue, Yes, but also Political and Economic

If we want to say things as they are, that begs the question: What can Syrian refugees consider dignified and safe conditions for their return?

Although the actual and detailed answer is long, it definitely stems out of two main aspects:

First, favorable socioeconomic conditions: that is, the possibilities for housing, work, education, health, and dignified living in general.

Second, favorable democratic conditions: that is, ensuring they are not subject to the influence of oppression, extortion, arrest, etc.

If we want to touch on how to secure these conditions, there is no escape from the fact that fully securing them cannot be achieved without achieving several things, including:

What Should we Do First?

The problem with the method of political clashing over the issue of Syrian refugees is that extremists on both sides are working to insert it into a set of preconditions that ultimately lead to a vicious cycle and revolving in place.

On the side of the extremists within the regime, there is an outward push towards a solution through the unfounded claim that conditions are now met for return and that the issue is not at all connected to a political solution, but rather is limited to the attempt by certain countries to invest politically in this issue. Meaning, the refugees have to return without any changes to the existing conditions, and this is a precondition based upon which those who put it know the refugees will not return, and probably have no desire for them to return in the first place.

On the side of the extremists within the opposition, there is also an outward push towards a solution by saying that the conditions are not and will not be met before the political solution is fully completed, and pending the completion of the latter, it is good to maintain sanctions, and in a way welcoming that the conditions of Syrians worsen, whether in the regime or opposition areas! That is because, according to what they claim, it will speed up the solution.

Dealing with the issue from a humanitarian and patriotic point of view should start from breaking this vicious cycle. Demanding and working on ending sanctions and ending the blockade is part of securing the conditions required for return, and it is also part of bringing closer the political solution, because the sanctions, in essence, aim to maintain the status quo and push it towards decay and partition. (For those who want to know which model the West follows with the Syrian refugees’ issue, they should study the Yugoslavian model, which was not only partitioned, but the largest part of the refugees who left during the war have not returned, and it has been over twenty years since the war ended!)

However, does this mean that the political solution should not begin until the sanctions are lifted? To the contrary, the West only puts its sanctions in place to delay the solution, and therefore those who require that the solution starts when the sanctions are lifted (and they are, in fact, also the ones benefiting from those sanctions), in reality want to maintain the situation as is and prolong it because they fear change. The reverse is also true, where those who see the necessity of continuing the sanctions to reach a solution also know that the sanctions themselves hinder the solution, and they are happy with that because they too are working according to a logic that only leads to partition in the end, including their rhetoric about a constitution for part of Syria, elections laws, political parties, and temporary decentralization, etc.

The return of refugees will certainly remain very limited and will not amount to an actual return that will truly solve the issue before the conditions required for that return are met. The truth is that Syrians can begin to return before the conditions required for return are fully met, provided that Syrian refugees trust that the conditions are on the way to realization. In this sense, what is required is to proceed in realizing all these conditions in parallel. In other words, we should immediately start implementing UNSCR 2254, the application of which will extend for a period of time, and we should insist on ending the sanctions and the blockade.

Last modified on Wednesday, 11 November 2020 18:39
arrow_forward What is Charlie Hebdo and What is its Job? Jeffrey Wants the “Quagmire Mission” to Go on… “Stalemate is Stability” arrow_back

Astana and Sochi, Now What?

The Right to Self-Determination Terminology

The Guarantees and the Concessions

For Syria to be Fine…