The Weakest Links in Global Debt

Recession is here, the production chains are breaking down – some partially and some totally, and this breakdown is directly reaching the financial system: stock values are declining, debts are difficult to pay, liquidity and ability to finance are shrinking. Soon, the stopping will not be due to a virus or epidemic, but rather due to bankruptcies.

Debts constitute the biggest gap, because global economy lives on and feeds off debt, which has become more than three times the global product. That is, if the world wants to pay off its debts (which is an unreasonable assumption), it must commit global incomes for three years to pay off the lenders.

The most important question during crises: Who are the weakest links based on the volume of the debts? Are they the ones that have a great amount of debt, and should therefore be claimed sooner?

How is Global Debt Distributed?

72% of the global debt is in the center powers or countries: the US, eurozone countries, the UK, and Japan. The rest of the global debt, that is 28% is distributed over the rising powers, and the medium- and low-income developing countries. The debt crisis in the rich countries is deeper, not only because of its larger size, but also because it constitutes a greater percentage of the GDP of these countries, where the debt is almost four times the GDP, while the debts of the developing countries are nearly twice their GDPs. 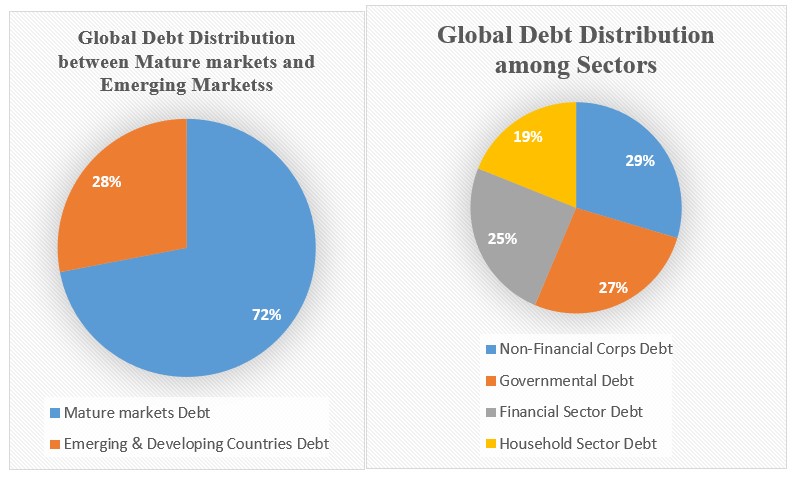 The ten years following the 2008 financial crisis saw a massive expansion of debt in two directions: government debt in developed countries, and debts of non-financial corporations in developing countries. This means that the massive financial pumping, the primary source of which is western central banks – in the US, the EU, Bank of England, Bank of Japan, and the Swiss National Bank – turned into a way to pressure the governments, specifically in the center countries, and on the manufacturing corporations across the world distributed equally between the center countries and the margin countries.

Most of the debts of corporations of emerging and developing countries are debts in local currencies, and there are no foreign debts at a high percentage except in major global financial centers, such as corporations in Hong Kong whose dollar debts constitute 182% of their production, in Singapore 67%, and in Turkey 40%, while in South Korea, Russia, and Brazil the percentage varies from 15-18%, and drops to 8% of the production of Indian manufacturing corporations. 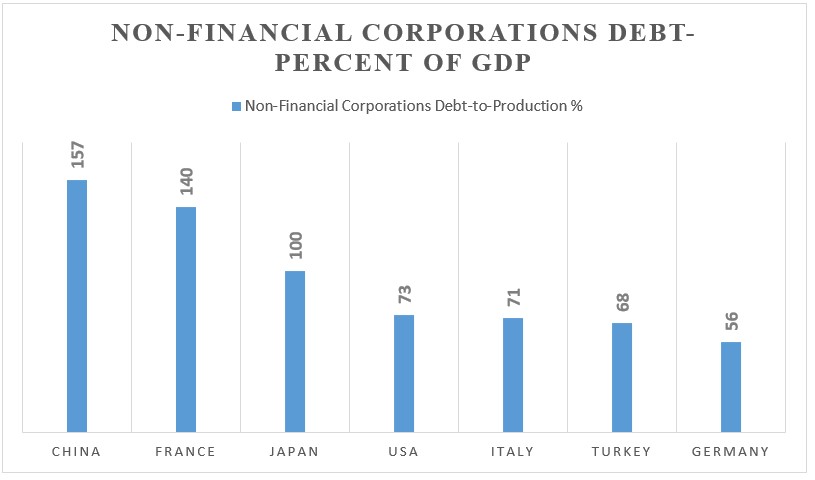 Global debt data and its initial distribution shows that governments in the West in particular are mortgaged to the owners of global money and major lenders. If we consider the government’s debt to GDP ratio as an indicator of the extent of correlation, Japan would be the country most dependent on debt with 223% of its GDP, followed by the UK and the US at approximately 101% for each, and then the eurozone governments with an average of 98%. However, the eurozone ratio differs from one country to another; while the government debt to GDP ratio in Germany is 65%, the ratio rises in France to 98%, Spain 98%, and goes higher in Italy and Greece, reaching 135% and 180%, respectively.

Western governments owe primarily to their central banks, which are owned by big private shareholders, which makes the governments behave now in an aggressive and fragile manner during an experience like the coronavirus epidemic, for example, where it cannot efficiently deal with a health emergency and get motivated to use armies and focus on saving markets and corporations, while most of them cannot guarantee their citizens in a complete lockdown. However, this with the intensification of crises and the deepening of their economic and social effects, and the appearance of the consequences of the deterioration of the health system and social security, along with increase of unemployment makes governments fragile also in the face of societies, and fragile in the face of the due changes in international relations, such as European governments having to open up to dealing with China and Russia regardless of “US orders”. 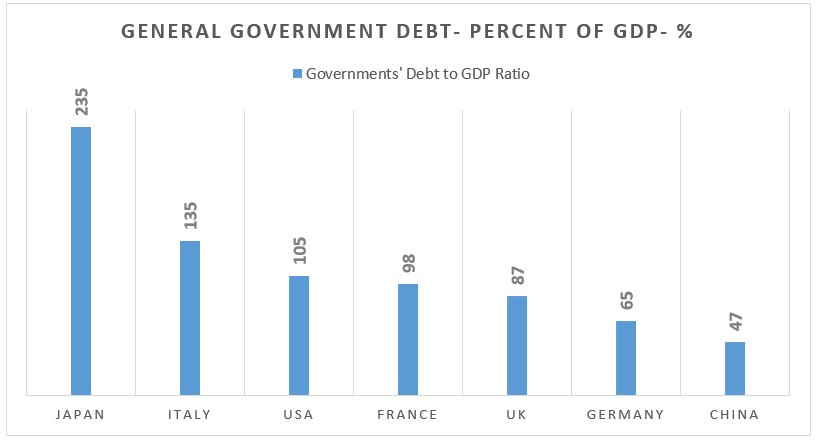 A Debt that Cannot be Saved

The global debt that is mainly the debt of governments and non-financial corporations explains the concentration of Western financial rescue packages today in two directions: additional debt securities for governments, and the purchase of the debts of major corporations in the centers to prevent them from bankruptcy that has not yet been realized.

Nonetheless what was considered a pressure card on governments and corporations may turn during times of crises into “the magic turning on the magician”. In practice, “the owners of global money” and those with the ability to print money in the Fed and western central banks have become deeply linked to the failure of governments and the failure of the global manufacturing sector. This makes continuation dependent on one of two options: either canceling and wide restructuring of the debts, or “a blood clot in the veins” of the whole international manufacturing and spending process, and the series of bankruptcies will not be saved by the aforementioned financial packages. In either case, the greatest risk is threatening the global debt currency, that is, the dollar, which constitutes the largest proportion of the world’s debt.

The inability to repay debts temporarily enhances the strength of the dollar and becomes required globally, but it also and after a certain threshold opens the possibilities of default and cancellation of debts and the dollar debt bond becomes worthless.

The series of bankruptcies has not started yet, and it has been anticipated by a massive injection of more liquidity, where in under a month, 27% of the liquidity that was pumped during the past ten years was announced; nevertheless, the rescue money that was announced in the US for example – $2.2 trillion –constitutes only 7% of the debt of the government and corporations, and the percentage is even lower in the EU.

The sources of financial packages and additional trillions know that they cannot stop the chain of bankruptcies, but the packages are required to prevent the collapse of governments and the restructuring of large corporations temporarily. As for later, there is no serious solution looming on the horizon; bankruptcies can only be prevented by creating some growth, while the world gradually enters in disruption and stagnation, global manufacturing and consumption are disrupted. Additionally, growth cannot be restored within its broad framework except one of two solutions: either global destruction, or a new global manufacturing system with another concept of growth that guarantees human development, not corporate profit, and guarantees the sustainability of nature and resources, not amplifying wealth.

*Mature markets: are the economies of US, Eurozone, UK, Japan. as in the classification of IIF (Institute of International Finance).

Last modified on Monday, 30 March 2020 00:56
arrow_forward “Resonance” and a Looming Collapse (In)equality of the Coronavirus arrow_back