Specialized and non-specialized websites and magazines are flooded with an enormous number of articles and research related to the current global economic crisis, and these sites vary in how close they are to assessing the reality of what is going on.

It is understandable, of course, that those who work for the benefit of the one percent who possess 44% of global wealth, go to great lengths to say that the current crisis, despite its immeasurable magnitude, is a crisis like other crises that arose during the last hundred years, and that recovery is the inevitable fate, and the only question is how long will it last and what are the costs and losses it will cause.

Analysis of the international economic situation during crises tends to examine a set of basic indicators, and to compare their values and movement during the crisis in question and during previous crises.

In this context, we can show in the following table a comparison among the five largest crises of the last 100 years.

The above table shows in its columns (from left to right) the following values:

1- The date that witnessed the highest peak value of the market immediately before the crisis, and from which the calculation of the decline in the values begins;

2- The date that witnessed the lowest values of the market;

3- The period between the two values during which the decline occurred;

4 - The total duration of the crisis, i.e. the time it took for the markets to return again to the pre-crisis peak;

5- The total decrease during the decline period; and

6- The average monthly decline during the regression period.

Undoubtedly, this kind of comparisons allows the reader to better understand the depth of the current crisis compared to its predecessors, but it certainly does not allow a more comprehensive understanding of the fate of this crisis.

In order to get closer to the truth, one could look at very important indicators like the ratio of the general global debt from the global product. This shows the debt bubble as an important indicator of the real size of inflation around the world. Furthermore, an indicator of the real size of the product, and consequently the real growth, away from the calculations that are inflated intentionally, which is one of the tools of redistributing wealth for the benefit of the few.

Whatever indicators researchers rely on to present their analyses of the current crisis and their expectations for its fate, the length of the examined period gives more important and in-depth dimensions to these indicators. That is, examining the growth index over the past 25 years, for example, does not provide as accurate and comprehensive understanding as that provided by examining the same indicator over 50 or 100 years.

The more sharply and rapidly the movement of one of the indicators fluctuates, the more we will need to expand the historical period examined to understand the general tendency of its movement.

What we argue here, is that the “interest rate” index, which is of the aforementioned volatile type, can alone – if we expand the historical range examined – give an accurate picture of the current crisis in particular.

The Interest Rate over Seven Centuries

In February, Dorothy Neufeld, an economist, published the chart shown below, which expresses the decline in global interest rates over 700 years. 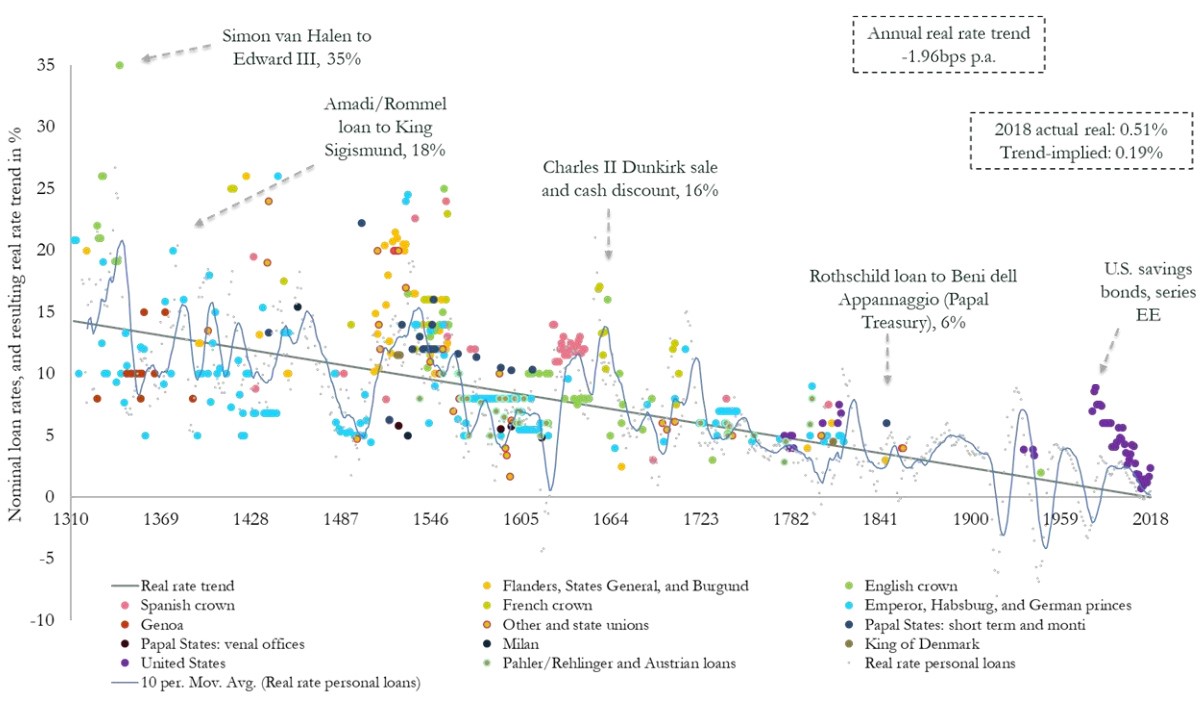 The graph above is very clear: the general tendency of interest rates is a negative one, always in a declining direction. In the current crisis the interest rate has reached zero, not as a temporary measure controlled by banks, including the US Federal Reserve, but rather as an inevitable consequence of a long historical development.

But what does that mean? It means precisely: “the tendency of the rate of profit falls as the organic composition of capital becomes more complex”; that is also one of the most important laws discovered by Marx in his book “Capital”.

In order to explain things in a simpler manner, let us answer again a simple and clear question: What does the interest rate mean? Person A borrows commodity from Person B for a specified period of time, provided that Person A returns it in full in addition to a percentage thereof, which is the interest rate.

Despite the simplicity of these words, it contains a number of secrets:

- Person B is actually the banks.

- The commodity loaned is money.

- The bulk of this commodity is not any money, it is actually capital, that is, money of the type that is used to produce additional money.

- For the process to be profitable, Person A’s rate of profit from the use of the borrowed money must be higher than the interest rate.

At this point we can reach an initial result that says: When the interest rate decreases, the average rate of profit in various sectors will have decreased, and for banks to continue to lend and profit through lending, they have to reduce the interest rate in order for it to become feasible for the borrower, otherwise the banking industry will collapse.

However, what is more important than that, and what we can gain from the process of expanding the historical scope of the study, is that the steady tendency towards a decrease in the interest rate, reaffirms Marx’s law: decline in the rate of profit.

In the current crisis, we have reached – in a historical sense – the largest historical decline in interest rate, by reaching zero. Consequently, the rate of profit has also decreased to or near zero. This decline is not temporary, not transient, and not only related to the current crisis, but rather is like fate, because objective laws in a certain sense can be likened to what is called “fate” in peoples’ beliefs, a fate that cannot be restored or changed, and can only be understood and dealt with.

What Does Zero Rate of Profit Mean?

According to Marx, what determines the average interest rate is not the average rate of profit in general, but rather the average industrial rate of profit. Since industry is the primary producer of wealth, an average profit equal to zero means zero growth, or even a negative growth if we take into account the normal depreciation of fixed capital – i.e. the normal depreciation or deterioration of machinery and factories, etc.

In sum, zero rate of profit means one thing: there is no longer any historical possibility for capitalism to continue. Capitalism means profit, it means employing a certain amount of money as private capital (through which you exploit the work of others while armed with depriving them of the means of production), so that the cycle ends with you getting more money. The difference between the two quantities is profit.

arrow_forward Will Pavlov’s Trick Work on Us? An Invitation to Rethink “Resonance” and a Looming Collapse arrow_back