What Will the Resumption of Syrian-Turkish Relations Mean? In What Form and on What Basis Will They Resume?

The year 2019 witnessed an important turning point in the Syrian crisis track. By the end of that particular year, almost three years had passed since the Astana process started, which had achieved, in principle, a comprehensive ceasefire.

In parallel, the conflict between the Washington-led Western “small group” and the Moscow-led Astana trio had reached its peak. It is no coincidence that that particular year had witnessed the most strident Western statements against Astana, including calls to busy that process once and for all; those calls were made by each of James Jeffrey, the US Special Envoy at the time, as well as the US representative in the UN Security Council at the time.

The end of 2019 also witnessed two important events. The first is the American so-called “Caesar Act” of sanctions on Syria going into effect the last month of 2019; and two months prior to that, i.e., in October, the launch of the Constitutional Committee after obstruction of its formation lasted two full years after the Sochi Conference, which took place in the beginning of 2018.

All these changes that 2019 witnessed meant in essence that the center of gravity of the process of destroying Syria has shifted from military action (after that door was closed) to economic and political/cultural action.

As the most severe sanctions went into effect, in conjunction with the Syrian government policies that benefit the major corruption forces, as well as the policies of the dominating and corrupt forces in the various areas of control in Syria, a large-scale process of plowing of the population began. This process surpassed in its gravity even that which took place during military operations. The plowing of population wave that was based on closure of the political horizons and the horrific deterioration in living conditions did not displace populations from an area or a city (subject to military conditions as in the past), but rather affected the entire country, primarily displacing the competencies and youth, to the point of causing catastrophic disruption in the structure of Syrian society and in the possibilities of subsequent renaissance.

Perhaps one of the most prominent deterioration indicators is the deterioration in the exchange rate as well as the standard of living. As for the exchange rate, at the end of 2019 it was around 900 SYP to the dollar; today, less than three years later, it has exceeded 4500 SYP to the dollar. That is, the Syrian pound has lost 80% of its value at the end of 2019, while during nine years starting at the beginning of 2011 and until the end of 2019, it had lost 95% of its value, with an average value loss of 32% every three years. This means that the speed of plunge in the exchange rate over the last three years was 2.5 times what it was during the crisis years prior to 2019.

What is possibly more dangerous than that is that US and European sanctions were primarily designed to fuel and develop the black-market and criminal economy, including drugs, crime, and so forth. This would destroy the spiritual, cultural, and moral structure of society on top of destroying its physical structure. All these catastrophic effects will stay with us for many years to come and will be additional burdens that Syrians have to bear.

Shifting from defense to attack

It can be said that what the Astana process has done in total since its formation and until just before the recent Tehran summit was confined to the framework of defense against Western sabotage. Needless to say, the internal contradiction was the main contributor to restricting the capabilities of this track and setting ceilings on what it could do.

Moreover, the effectiveness of this track can be measured based on the ability of its trio to resolve their internal contradictions, which still exist, though they surely have gradually shrunk over the last five years. The post-Ukraine development of the stormy international power balance has helped in shrinking those contradictions.

In parallel with all that was the Western shift – in conjunction and cooperation with the extremists and the major internal plunderers – to economic sabotage. This was an effective tool in complicating the situation to a catastrophic situation to the point where the military objectives could be achieved with economic tools. What is intended is ending Syria itself, at a minimum as a functional role in the region within the ongoing conflict, especially with Zionism and the West in general, and at a maximum ending its existence as a whole through partition and fragmentation.

All of that, with all the major existential threats it carries for the three Astana countries, in additional to development of the international situation in a direction that serves Astana, as well as the development of agreements among the trip, has pushed towards shifting from defense to attack. 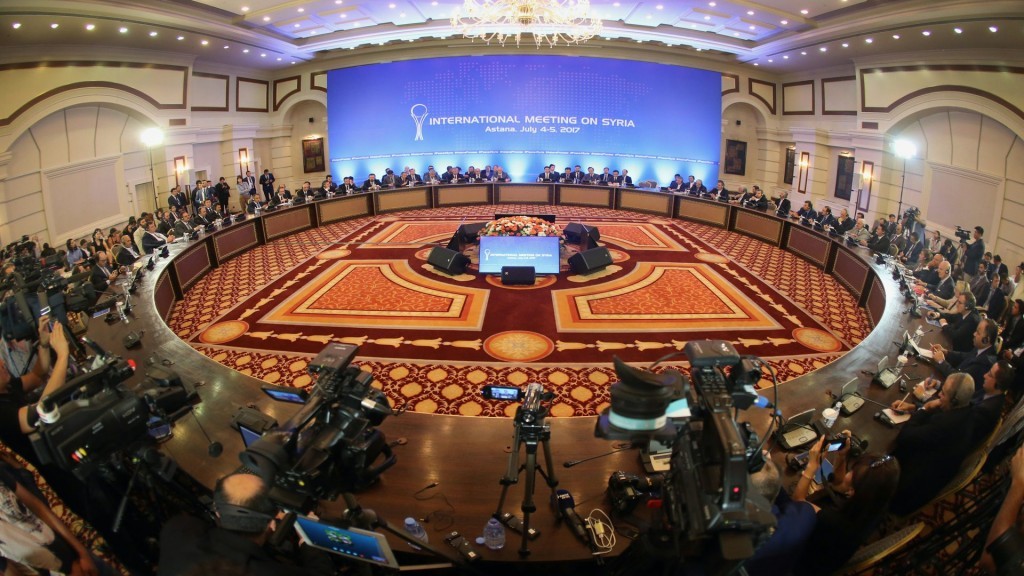 The attack tools and objectives

The circles of Western research centers as well as some of its media outlets, when dealing with the Syria file, are openly asking questions such as: Is it still possible to implement 2254 or would it be better to think about finding an alternative? They also pose questions about the relationship between Turkey and the opposition, and about the nature of Turkey’s positioning in the Syrian file.

In addition, there are a number of media “leaks” talking about an American push towards extracting part of the Turkey-linked opposition from Turkey, using temptations related to funding and rearmament in certain parts in northwestern Syria, effectively under the umbrella of al-Nusra.

All these signs point in one direction, which is that the West is on the verge of a rupture with Turkey regarding the Syria file. More importantly, the West is convinced that Astana is moving along in taking over the Syria file regardless of the West’s will or its opinion. Therefore, the West is actively seeking to sabotage again, using its influence and the intersection of its interests with extremists from all sides and plunderers of all sides too. The results of this is what we are seeing on a near daily basis from the Syrian sides through positions and actions, which are extremely contradictory on their face, but practically working in the same direction, that is, towards preventing the solution.

On the opposite side, i.e., on the side of the Astana trip, it is very clear, not only through the numerous joint statements, but also through actions, that final expulsion of the US from Syria is on top of the agenda, and in parallel preparing for a comprehensive solution on the basis of UNSC Resolution 2254. The latest Turkish statements came in this particular context (See Kassioun Editorial #1083 “Syria and Turkey, Whereto?” and the Political Editor’s article “Regarding Turkey’s Foreign Minister’s Statements”).

Western economic extortion of Syria relies on two main pillars. The first pillar is the sanctions through the Caesar Act and others, and the second is the interests of the war lords and extremists from the Syrian sides for whom the crisis is no longer just a plundering source that generates gold, but moreover the crisis and sanctions themselves have become a lifeline. That is, ending the crisis means opening the door wide to eliminating the black-market criminal economy that bring billions, and also means opening the door to removing the owners of this economy and ending their domination and influence.

In addition to these two pillars, one of the most important tools for the continuity of this criminal economy and with it the continued impact of sanctions, is for Syria to be effectively besieged from all sides. Beyond Lebanon, there is a sea through which the blockade is imposed; with Jordan, there is al-Tanf base and the well-known Jordanian policies; with Iraq, there are US bases; and with Turkey, there is Turkey itself and its positions. Inside, there are the major plunderers who work as an executive arm of the Caesar Act inside Syria.

Effectively breaking this ring is not practically possible except through Turkish borders, which are the longest (more than 900 km) and which are alive on both sides. More importantly, behind Turkey there is Russia, China, and Iran. That is, the borders with Turkey can quickly and effectively become a direct connection for Syria with the rising powers, with which economic connection has become a matter of life or death, not only for Syria, but for any people who wants to escape the ongoing fierce international battle.

The possibility of achieving this is increased by the significant improvement of relations between Russia and China with the Arab Gulf countries and Egypt, as well as the recent Turkish rapprochement with these countries. All these relations and connections effectively contribute to isolating the West and with it “Israel” from the entire region, and contribute to besieging the besieger.

Determinants of the understanding

Although all of that requires a Syrian-Turkish understand, this understanding itself cannot happen in the form that extremists on both sides are portraying, which is in the form of “de facto normalization”. Syrian extremists from all sides know this very well, therefore, they are making their utmost efforts to obstruct and sabotage the understanding, if they are able. Even in Turkey itself, which is historically a NATO member and in which American influence and infiltration is still effective despite all the blows it has received since 2016, there are also active obstruction processes to prevent moving forward to reaching an understanding.

The basis of the understanding will be the verbal and actual recognition by Turkey of Syrian sovereignty and the Syrian people’s right to self-determination through Resolution 2254, that is, through dialogue between the regime and the opposition, where Turkey does not have the right to exclude any one from the latter.

Crux of the issue

It is quite understandable that among the popular circles, whether those affiliated with the opposition or loyalists, there are those who are extremely provoked by the possibility of reaching a Turkish-Syrian understanding. On the side of the opposition, in the popular sense, in addition to the huge accumulation over the last bloody years, the issue gets presented to them as a victory for the regime and defeat of any project for change, and they are therefore conscripted and mobilized against any possibilities of the kind. On the side of the loyalists, in the popular sense, also in addition to the huge accumulation, the issue gets presented as a defeat of the regime at the hands of Turkey.

Both reactions are normal after years of rhetoric about “military defeat” and “overthrowing”, and years of organized work to prevent any possibility of alienating Turkey from the Western trend, which is practically represented by working against Astana, whether among the opposition or the loyalists.

What should be clear is that the crux of the issue is completely somewhere else other than what is said in the media by the extremists from the various sides. The crux of the matter is that the quest for a Syrian-Turkish understand is one of the tools of permanently expelling Americans from Syria. It is therefore one of the most important tool for the full implementation of UNSC Resolution 2254, the main obstacle of which was and still is the Americans and Westerners in general, and the Zionists in particular.

Last modified on Monday, 22 August 2022 19:49
arrow_forward Regarding Turkey’s Foreign Minister’s Statements The Way to Expel the Americans from Syria, As Soon As Possible and With Minimal Losses arrow_back