This gasoline price is an exceptional one, particularly with the global decline in the prices of oil and oil products, which continued and even intensified in March and April of this year and is likely to continue.

This table shows a comparison between the global price, the regional price from Lebanon to the UAE, the cost in Syria, and the average price at which the government sells in Syria.

Triple the Price in Lebanon

The Syrian government pays importers $0.85 per liter of gasoline, that is it pays them triple the selling price in Lebanon, which can be considered the best model for comparison given that Lebanon imports all its fuel and at a liberalized price that includes tax costs, and is also a monopolized profitable price, as importing is considered monopolized in Lebanon. That is, if the Lebanese importer sells gasoline at $0.29 per liter, the importer can cover the costs of importing, shipping, transporting, and imposed taxes, and even the profits of the distribution sector and gas stations.

On the other hand, in Syria, importers receive an additional $0.56 from the Syrian government over the Lebanese price, and we pay from the general public money an additional 400 SYP for every liter of gasoline imported by the Syrian importer. It is noteworthy that international data indicates that Lebanon is one of the main sources of importing oil products to Syria, that is oil is imported to Lebanon first and then imported into Syria. Nevertheless, the Syrian cost is 3 times higher than that in Lebanon.

It should also be noted that the cost of a liter of diesel in Lebanon has decreased to $0.10 per liter, or about 80 SYP, while its subsidized and official price in Syria is still approximately $0.20 per liter, which indicates that the additional costs in diesel may be almost 100%. This is the first time that the reverse smuggling of diesel has taken place along the borders, from Lebanon to Syria, according to many Lebanese reports. 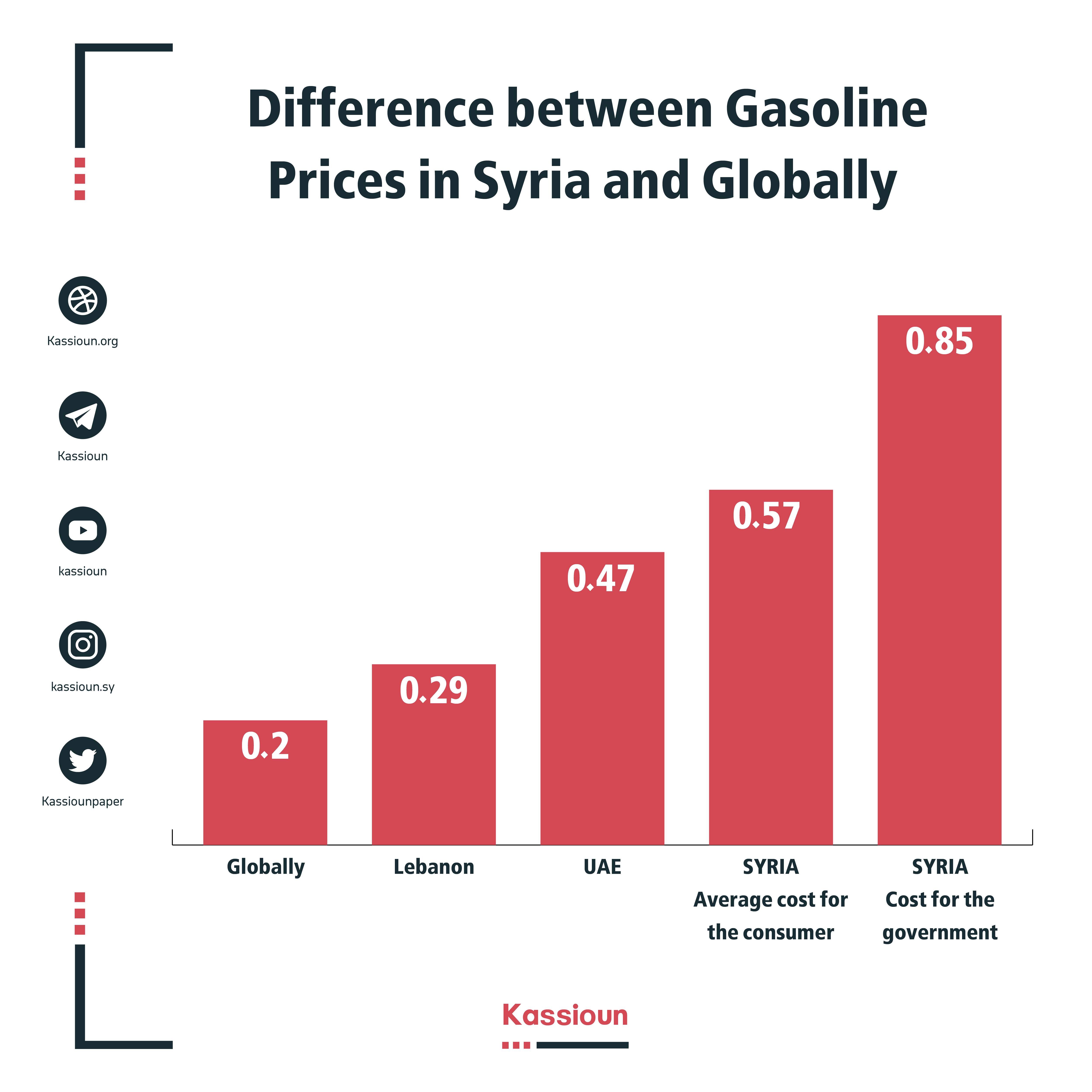 *The price of a liter of gasoline and diesel in Lebanon from the official bulletin dated 5-5-2020, where the price of 20 liters is approximately 23,500 Lebanese pounds, about $5.8 according to the exchange rate of 4000 Lebanese pounds to the dollar.

Did the Government Seek to Save 465B SYP from the Importers?

According to official statements, the average quantities of gasoline imports are approximately 1.64 billion liters annually. If each liter includes additional sanctions’ costs of approximately $0.56, the additional payments paid by Syrian public money during a year to gasoline importers may reach approximately $920M, if global gasoline prices remain at this level. That is nearly 645B SYP, which is an additional profit distributed to importers and to local and international banks involved in the importing.

If the Syrian government wants to find ways to achieve savings and reduce subsidies, it should focus on ways to reduce the cost paid to importers, and not increase prices for the Syrian consumer groups or reduce the amount of gasoline imports.

What the government calls “fuel subsidy”, is actually amounts paid as costs for the sanctions and blockade imposed on Syria, and these costs are the subsidy that the government pays from the public money to the few who monopolize importing oil and oil products into Syria. As for these costs, they are practically an additional profit obtained by those who are blockading Syrians and are distributed among the major importers who import from their international and regional accounts and charge “the cost of risk” to the public money. They also use part of the profit to pay banks, insurance and transportation and shipping companies, all of whom are blockading Syrians and benefiting from the austerity measures that the government imposes on the various economic and service aspects of life.

The most dangerous blockade is the one applied by whoever has the ability to change this importing mechanism yet does not pursue it, the parties that do not want to enter into official import agreements and contracts between two states, through bank payment mechanisms that do not use the dollar, and by providing a single publicly-owned oil tanker that can take a risk without paying such costs to the brokers.

The siege on Syria is imposed by domestic and international entities, all of whom are partners in turning sanctions into an exceptional profiting opportunity.

arrow_forward In As-Suwayda ... Initial Signs of a New Wave of the Popular Movement A Preliminary Opinion on the (Preliminary) Kurdish-Kurdish Agreement arrow_back